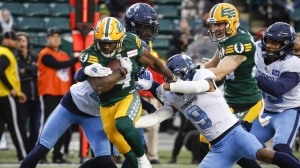 The Edmonton Elks have found a lot of ways to let games slip through their fingers during their CFL-record 16-game home losing streak.

But Saturday’s 28-23 loss to the Toronto Argonauts might be most the heartbreaking of all.

The Argos did not take the lead until 27 seconds were left on the game clock at Commonwealth Stadium. A.J. Ouellette’s 25-yard scamper into the end zone on a second-down-and-nine gave the Argos (10-6) the win and kept them two games ahead of the Montreal Alouettes in the East.

Ouellette’s run wasn’t even designed to go to the end zone. Trailing 23-21, he was just trying to make sure to not turn the ball over and put the ball in a good spot for kicker Boris Bede to try a game-winning kick.

“I put two hands on the ball, to set up Bede for the game-winning field goal,” Ouellette told TSN. “They just parted like the Red Sea.”

The Elks got 121 yards rushing and a touchdown from Kevin Brown. Their special teams recovered two kickoff fumbles from Argo returner Jeremiah Haydel. These things should make a recipe for victory.

“We had everything going right, but we have to keep the momentum going on our side,” lamented Brown after the game. “Maybe we got complacent, maybe we thought we had this in the bag, but we’ve got to finish. We’ve got to fight until the last blow of the whistle.”

Elks backup quarterback Tre Ford only went into the game for one play, while starter Taylor Cornelius was being examined for a potential head injury. That play changed the game.

The Elks were up 23-15 in the fourth, and had just recovered their second kickoff fumble. Ford then tossed an interception to Royce Metchie.

DaVarus Daniels caught a 43-yard touchdown strike from McLeod Bethel-Thompson three plays later, but the Argos missed the two-point convert. It didn’t matter. The Argos got the ball back and Oullette sealed the deal. He finished with 91 yards rushing on the night.

The Elks took a 16-6 lead into halftime, on the strength of three field goals from Sergio Castillo and a seven-yard touchdown toss in the slot from Cornelius to Danny Vandervoort.

But, the Elks really should have been up by a lot more. The Elks held Argos quarterback Bethel-Thompson to just 34 yards passing in the half. The Elks held the ball for more than two-thirds of the half. But, they couldn’t convert all that possession into anything more than one major.

The Argos presented the Elks with a gift immediately after the Vandervoort touchdown. Haydel decided to make an attempt to lateral the ball right after receiving the kick from Castillo The ball only found the Commonwealth turf, and the Elks pounced on the miscue.

But, as with two other promising drives in the half, the Elks had to settle for three.

The roles were reversed after the halftime break.

The Argos had three long third-quarter drives. Bethel-Thompson began to hit his passes. He finished with 273 yards on the night, But, like the Elks in the first half, the Argos couldn’t convert the yardage into touchdowns. Three second-half Boris Bede field goals brought the score to 16-15 to begin the fourth quarter.

Brown’s four-yard touchdown run to make it 23-15 was set up by a 30-yard scamper from Cornelius. But he took a vicious hit and had to sit out to be examined. And Ford came in.

Cornelius blamed himself for taking the shot at the end of the run.

“I’ve got to stay in the football game,” he said. “I’ve got to get out of bounds and save that for another day. I couldn’t do anything about it, I’m getting through concussion protocols on the sideline, it’s just an unfortunate series of events.”

And the Elks continued to make history.

“This game was huge for us,” said Ouellette. ”Coming in, we thought we would be able to physically dominate. But, that’s a great football team. I mean, it’s professional football, you have to go out and give your A game. For us, we had a battle all the way to the end.”

The Elks wrap up the season with a home date against the B.C. Lions on Friday. The Argos can clinch the East Division title if they go to Montreal and win next Saturday.