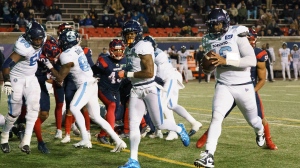 TORONTO -- Antonio Pipkin will finally make his first start for the Toronto Argonauts.

Pipkin will be under centre Tuesday night when Toronto (9-4) hosts the Edmonton Elks (2-10). The Argos downed the Hamilton Tiger-Cats 31-12 at home Friday night to clinch first in the East Division.

Toronto alternated between McLeod Bethel-Thompson and Nick Arbuckle at quarterback before dealing Arbuckle to Edmonton on Oct. 27. Bethel-Thompson is on the Argos' depth chart for Tuesday's contest but behind Pipkin and rookie Cole McDonald.

The start will be Pipkin's first since 2019 with the Montreal Alouettes. The six-foot-three, 225-pound Pipkin has been used mostly in short-yardage situations this season, rushing for 53 yards and four TDs on 18 carries but has also completed three-of-four passes for 47 yards.

Regardless of whether he's starting, Pipkin, 26, said his preparation remains consistent.

"I prepare myself to play no matter what the situation is," Pipkin told reporters Monday. "This is just another week for us to go out and execute the game plan and (I) just look forward to getting the ball to the playmakers."

The game was originally scheduled for Aug. 26 but was postponed due to COVID-19 concerns and rescheduled for Tuesday night,

Edmonton comes in having lost eight straight, most recently a 29-24 road decision to the Saskatchewan Roughriders (9-4) on Saturday.

"Our focus is on ourselves at this point and trying to get a win," said Elks first-year head coach Jamie Elizondo. "I think regardless of the circumstances for Toronto, we just feel like we need to come out and play good, consistent football and try to get a win to get that good feeling back."

Argos rookie head coach Ryan Dinwiddie expects Pipkin to play much of the game but also wants to give McDonald snaps.

"I just want (Pipkin) to call a game and kind of use his skill set the right way," Dinwiddie said. "He's got all the arm talent in the world, we just haven't had a chance to see him too much.

"He (McDonald) got up here later (and) without a training camp it's pretty tough to get reps with the other two are taking the majority of them. But he's got a good skill set, he has a big arm … he can create and do some things with his legs as well. We're going to make sure we call some plays to let those guys go have fun and go compete."

And play for the win.

"We want to finish undefeated (7-0) at home, finish 10-4," Dinwiddie said. "You always want to win every football game you play.

"I told the young guys it's an opportunity for them to showcase their skills … and also some of the veteran guys to finish up the season the way we want to. You can't go out there and fake it and so they've got to go out there and be ready to play football."

Both Toronto and Edmonton will be allowed to dress 50 players, five more than normal. The Elks will also be given that latitude Friday night when they cap their late-season whirlwind visiting the B.C. Lions (4-9).

"Toshiki has a really sweet swing," Dinwiddie said. "He's more of a kicker than a punter, he doesn't have the biggest leg punting but field goal-wise he's been pretty solid.

"Hopefully he'll hit a game-winner for us."

The good news for Toronto is veteran receiver Eric Rogers (hamstring) will return Tuesday. Edmonton will also have receiver Derel Walker (groin) and running back James Wilder Jr. (ankle), both former Argos, back in its lineup.

"That's huge," Elizondo said. "Just having James's energy, his passion, his leadership, his enthusiasm and then being able to look out there at Derel and have the confidence of having one of your top receivers back, I think that's always a comfort level."

Wilder Jr. was the CFL's top rookie in 2017 with Toronto. He's currently fourth overall in rushing (714 yards in 10 games, 5.4-yard average, two TDs) while adding 27 receptions for 224 yards and a touchdown.

Walker was the CFL's top rookie and a Grey Cup champion in 2015 with Edmonton. A three-time 1,000-yard receiver, Walker has 40 catches for 468 yards this season.

Rookie Taylor Cornelius will make a fifth straight start at quarterback and seventh overall. Cornelius has six TDs and one interception over his last four starts but is still searching for his first win.

"You can see the improvement week to week," Elizondo said of Cornelius. "He's done a really good job the last four games of protecting the football.

"He's handled the situation admirably. You cannot account for the fact this is all experience that's going to help him down the road."

Although Arbuckle signed an extension with Edmonton shortly after the trade with Toronto, he's currently on the Elks' reserved list.

This report by The Canadian Press was first published Nov. 15, 2021.