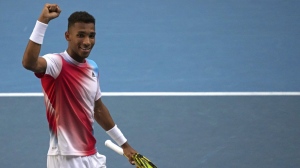 Felix Auger-Aliassime celebrates after defeating Marin Cilic of Croatia in their fourth round match at the Australian Open tennis championships in Melbourne, Australia, Monday, Jan. 24, 2022. Auger-Aliassime has been given the sixth seed in men's competition as four Canadians are set to compete in the main singles draws at Wimbledon. THE CANADIAN PRESS/AP-Simon Baker

LONDON - Montreal's Felix Auger-Aliassime has been given the sixth seed in men's competition as four Canadians are set to compete in the main singles draws at Wimbledon.

The draws for the grass-court Grand Slam were released Friday, with Auger-Aliassime entering as the highest-seeded Canadian.

Denis Shapovalov of Richmond Hill is seeded 13th in the men's draw, while Bianca Andreescu of Mississauga, Ont., and Vancouver's Rebecca Marino will play in the women's competition.

The draw did not include top-ranked female Canadian Leylah Fernandez, who was left off the Wimbledon entry list earlier this month. The world No. 16 from Laval, Que., suffered a stress fracture in a quarterfinal loss to Italy's Martina Trevisan at the French Open.

Auger-Aliassime will face American Maxime Cressy in the first round. He reached the quarterfinals last year before being defeated by Matteo Berrettini in four sets (3-6, 7-5, 5-7, 3-6).

Auger-Aliassime, the world No. 9, is 30-15 this season and won his first ATP title at Rotterdam in February.

Shapovalov will open against France's Arthur Rinderknech. The world No. 16 reached the semifinals at Wimbledon last year before losing to then-world No. 1 Novak Djokovic.

Shapovalov will look to end a rough patch entering the Grand Slam that has seen him lose the first match in his last five tournaments.

Andreescu, ranked 64th, has never advanced past the opening round at the All England Club, but has impressed on grass this season. She plays Caroline Garcia in the final of the Bad Homburg Open on Saturday.

Marino, No. 107 in the world, will make her first appearance in the main draw at Wimbledon since 2011, where she reached the second round.

She will start the tournament against Poland's Katarzyna Kawa (No. 132).

Dabrowski and Olmos look for a second title this season after winning in Madrid last month.