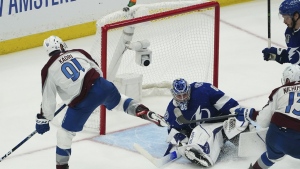 Colorado Avalanche center Nazem Kadri shoots the puck into the top of the goal past Tampa Bay Lightning goaltender Andrei Vasilevskiy (88) for a goal during overtime of Game 4 of the NHL hockey Stanley Cup Finals on Wednesday, June 22, 2022, in Tampa, Fla. THE CANADIAN PRESS/AP-John Bazemore

The Stanley Cup will be in the building tonight when the Colorado Avalanche welcome the Tampa Bay Lightning to Denver's Ball Arena for Game 5 of the NHL final.

The Avalanche lead the best-of-seven series 3-1 and are on the cusp of winning their third Cup title and first since 2001.

The Lightning are still in the mix to capture their third straight championship, but the 1942 Toronto Maple Leafs are the only team to come back from a 3-1 deficit in the Cup final.

Colorado moved to within a win of the title with a 3-2 overtime victory Wednesday in Tampa, Fla.

Nazem Kadri scored the winning goal in his return from a thumb injury suffered in the Western Conference final.

The goal was not without controversy, as Lightning coach Jon Cooper believes the Avs had too many players on the ice and should have been penalized.