Back at BMO Field, Toronto FC hopes home is where the wins are 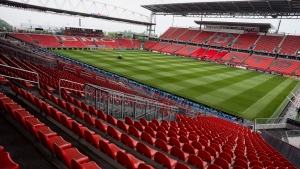 BMO Field in Toronto is pictured on Wednesday, June 13, 2018. THE CANADIAN PRESS/Christopher Katsaro

Buoyed by a coaching change, a rare win last time out, Jozy Altidore's return to the fold and sleeping in their own beds, players and staff at the 2-8-2 MLS club finally have something to smile about.

Goalkeeper Alex Bono says the team is “on a real high right now.”

Attendance Saturday will be capped at 7,000 with the crowd drawn from front-line health-care workers, first responders and season ticket-holders. That number will be increased to 15,000 for next Wednesday's home match against the New York Red Bulls.

The next home match after that is Aug. 1 against Nashville SC. TFC and Major League Soccer have not yet announced plans for that game and beyond.

The league and its Canadian teams have applied for a so-called National Interest Exemption, which would allow players who aren't fully vaccinated to cross the border with a modified quarantine. While most teams are almost fully vaccinated, they want to have access to all their roster.

The MLS Players Association said it is approaching 95 per cent of the player pool being vaccinated, though it did not specify whether that meant double-vaccinated.

While Toronto only announced the return to BMO Field on Wednesday, Orlando coach Oscar Pareja said his team knew last week that coming north of the border was in the cards.

Every player is “able and prepared” to travel, he said when asked about the requirement to be fully vaccinated to cross the border without quarantine.

While the mood is bright, TFC remains in the league basement, nine points out of the playoffs, and ranks last in the league on defence, conceding 2.42 goals per game on average. Toronto has given up a league-worst eight goals in the first 15 minutes of games and is 0-7-1 when conceding the first goal.

Toronto has gone 11-15-5 in all competitions since its last game at BMO Field on Sept. 1, with eight of those wins coming last year. The club has won just three of its last 17 matches (3-12-2) in regular-season and post-season play.

But one of those wins came last time out, a 3-2 victory July 7 at New England, in Javier Perez's debut as interim coach after Chris Armas was fired three days earlier. That snapped a six-game losing (and seven-game winless) streak.

Bono, who revealed Perez had cut him while he was in charge of the U.S. youth national team, said the Spaniard has brought calmness and confidence back to the team.

Orlando, meanwhile, has lost two straight, beaten 3-1 at Chicago in its last outing July 7. The Lions had won three straight before that, part of a 6-1-3 start to the season.

Both teams are missing players away on international duty at the Gold Cup.

TFC goalkeeper Quentin Westberg is questionable with a finger injury. But Altidore, who last played May 22 due to a falling out with Armas, is back training and available, according to Perez.

And while the burly striker likely needs to work on his match fitness, it means all three of Toronto's designated players are available with Alejandro Pozuelo and Yeferson Soteldo healthy and able.

Bono said it's as if Altidore never left.

“He's hungry in training. He's working hard. He's determined to make his stamp on this team again,” he added.

With 75 goals in competitions, the 31-year-old Altidore is second to only former Italian star Sebastian Giovinco in club scoring. But the U.S. international, whose US$3.6-million salary is the sixth-highest in the league this season according to April figures from the MLS Players Association, only has three goals in 17 league appearances over the last two seasons.

Like Toronto on a 10-day break since its last outing, Orlando has had time to work on its defence. After giving up just seven goals in its first 10 games, Orlando has conceded five in its last two outings.

Orlando announced the signing of veteran Argentine defender Emmanuel Mas this week but he is still working his way through some red tape.

On the plus side, Orlando goalkeeper Pedro Gallese (Peru) and defensive midfielder Sebas Mendez (Ecuador) are back from Copa America. And Brazilian forward Alexandre Pato (knee) and fullback Ruan (lower body) have returned to full training. Ruan last played May 8 and Pato the season opener April 17.

“It seems like everything is coming back to normal,” said Pareja.

Toronto has recalled Jordan Perruzza from San Antonio FC. The 20-year-old forward had one goal in six appearances on loan with the USL Championship side.

CAUTION: Toronto defender Omar Gonzalez will earn a suspension with his next yellow card.

GETTING TO KNOW YOU: The two teams did not face each other in 2020, going 651 days between matches. But Saturday marks their third meeting in 56 days.

This report by The Canadian Press was first published July 16, 2021