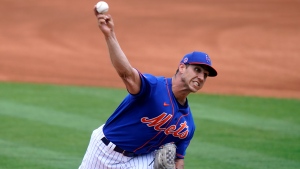 Barnes, 31, has a 1-1 record with two saves and a 6.27 earned-run average over 19 relief appearances this season with the Mets. The six-foot-two 231-pound right-hander has a 4.53 ERA over his six-year career.

Miller, 24, was 3-2 with a 4.93 ERA over seven appearances with advanced-A Vancouver and double-A New Hampshire this season. He signed a minor-league contract with Toronto in 2018.

The Blue Jays' bullpen has struggled mightily of late. The team recently dropped below the .500 mark after a decent start to the regular season.