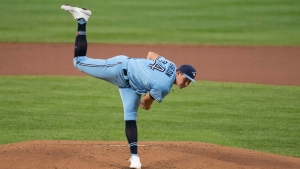 Toronto Blue Jays starting pitcher Nate Pearson looks into the plate after delivering a pitch during the first inning of a baseball game against the Baltimore Orioles, Tuesday, Aug. 18, 2020, in Baltimore. (AP Photo/Tommy Gilligan)

Pearson spent just over a month on the injured list due to right elbow tightness. The 24-year-old rookie, who didn't record a decision over four starts this season, will most likely serve as a reliever.

"If he comes out and he looks good out of the 'pen, throwing 98, 97, I wouldn't mind using him in high leverage," Blue Jays manager Charlie Montoyo said on a pre-game video call with reporters. "But he could also open for us if we need him."

The Blue Jays occasionally use openers, a term for pitchers who start the game but only throw an inning or two.

Toronto entered the finale of the four-game series against the Yankees with a magic number of one to clinch a playoff spot. The Blue Jays, who last reached the post-season in 2016, will close out the regular season with a three-game weekend series against the Baltimore Orioles at Sahlen Field in Buffalo.

Selected 28th overall by Toronto in the 2017 draft, Pearson is considered one of the top prospects in the major leagues. The six-foot-six right-hander can reach 100 m.p.h. with his fastball.

His presence would give a boost to a injury-riddled bullpen that has been uneven over the last couple weeks.

Closer Ken Giles is out for the season (elbow) while Jordan Romano (finger) of Markham, Ont., and Julian Merryweather (elbow) are on the IL. Rafael Dolis, who has served as closer and a setup man this year, is nursing a tender knee.

Over 16 1/3 innings this season, Pearson had 14 strikeouts, 12 walks and a 6.60 earned-run average. Reliever Wilmer Font will be involved in a corresponding roster move, Montoyo said.

Romano, who has been making strides in recent days, was scheduled to throw a bullpen session Friday, Montoyo said. Merryweather, meanwhile, remains day to day.

This report by The Canadian Press was first published Sept. 24, 2020.