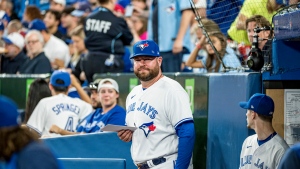 Interim manager John Schneider walks out of the Toronto Blue Jays dugout, before interleague MLB action against the Philadelphia Phillies in Toronto on Wednesday, July 13, 2022. THE CANADIAN PRESS/Christopher Katsarov

TORONTO - The Toronto Blue Jays and manager John Schneider have agreed to terms on a three-year contract with a team option for the 2026 season, the club announced Friday.

Schneider guided the Blue Jays to a 46-28 record after being promoted to interim skipper on July 13 following the departure of manager Charlie Montoyo.

The Blue Jays reached the playoffs but were swept in the wild-card series by the Seattle Mariners.

Schneider, a 42-year-old native of Princeton, N.J., is the 14th manager in franchise history.

“I am honoured, excited, and deeply humbled to continue leading this extraordinary group of players, coaches, and staff,” he said in a news release. “This organization has made me feel at home since Day 1. So many people have had a hand in helping me get here, and becoming manager of the Blue Jays is not something I take lightly.

“My family and I love Toronto and I can't wait to build upon an already great group of players and bring a World Series back to all our fans across Canada.”

Schneider and general manager Ross Atkins were scheduled to attend a media availability later in the day at Rogers Centre.

“Through his exceptional preparation, communication, positive energy, and relationships within the clubhouse, John demonstrated to us that he was the right leader for this team,” Atkins said. “His passion for the game, commitment to the job, and impact in the dugout have been driving forces behind our success.

“We look forward to working together and coming back as a stronger team for the 2023 season.”

After a mediocre first half, Toronto won 13 of 16 games once Schneider moved from bench coach to manager. A so-so August was followed by an 18-10 September surge that essentially sealed a playoff spot.

The .622 winning percentage is the highest ever by a Toronto skipper - with a minimum of 10 games managed - in his first season at the helm.

As the top wild-card seed, Toronto secured home-field advantage in the best-of-three first-round series against Seattle. However, the Mariners were dominant in a 4-0 win in the opener and came back from a seven-run deficit in Game 2.

Schneider was drafted by the Blue Jays in 2002 as a catcher and played six minor-league seasons before making the transition to coaching.

He later managed at five different levels in the organization from 2009-18, winning championships with Class-A Vancouver, Advanced-A Dunedin, and Double-A New Hampshire. Schneider joined the big-league coaching staff in 2019 and was promoted to bench coach before this past season.

The decision to continue with Schneider at the helm was not a surprise.

Atkins said late in the season that Schneider was “certainly a long-term fit” for the franchise. At an end-of-season availability, he added that “I think it will be very difficult for us to find better than John Schneider.”

One of Schneider's main goals will be to help get the Blue Jays past the first round of the playoffs for the first time since 2016. Toronto reached the American League Championship Series that year after ending a 22-year post-season drought the year before.

This report by The Canadian Press was first published Oct. 21, 2022.