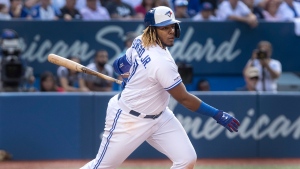 TORONTO - Rookie infielders Bo Bichette, Cavan Biggio and Vladimir Guerrero Jr. deserved accolades for their successful seventh-inning at-bats, pushing in a pair of runs and allowing the Toronto Blue Jays to win their second in a row against the mighty New York Yankees.

But relievers Jason Adam and Derek Law also warranted acclaim in the 5-4 come-from-behind win before 33,903 fans at the Rogers Centre on Saturday.

Adam pitched beautifully against the Yankees (76-41) on a bullpen day for Toronto (49-71) - Wilmer Font started and pitched two innings.

Adam yielded a sacrifice fly in the seventh inning that put the Yankees ahead 4-3 and gave up a careful walk to Aaron Judge. But Adam then retired the next four batters he faced, including a pair of strikeouts to begin the eighth.

That set the stage for Law. His finished off the eighth and ninth innings to earn a four-out save and hand the 28-year-old Adam (1-0) his first Major League victory, giving Toronto a 2-1 series lead heading into the finale on Sunday.

“It took a little longer than I would have liked,” Adam said. “It was special to get it against the Yankees and here in Toronto. Thankful is the best way I can put it.”

The latter now has three saves and hasn't given up a run in his last 11 appearances. He stated that he found his groove after the all-star break last month.

“I was maybe overthinking a bit too much - pitch selection, mechanics, stuff like that,” Law said. “Now I'm going out there free and easy, that's the best way to explain it.”

Free and easy also was how Bichette, Biggio and Guerrero appeared to lead off the seventh. All sons of former major leaguers, the three rookies delivered.

Bichette led off with a walk to extend his club record on-base streak to start a career to 13 games. Biggio then smacked a sharp single to right field off Adam Ottavino (5-4).

With a defensive swing, Guerrero knocked a drive down the first-base line for his first career triple and 25th and 26th RBI since the all-star game.

“I got the chance to watch them in (triple-A) Buffalo a little bit,” Law said. “I thought once these guys are (in Toronto), it's going to be fun to watch. Now they're doing up here what they were doing down there.

Teoscar Hernandez hit the only home run of the game for the Blue Jays with his 14th in 40 games to give him 18 for the season. Toronto now has clubbed homers in 15 straight games, only four shy of the 19-game franchise record.

“Adam had to go out there and get some outs. Same for Law, (Tim) Mayza. It was teamwork.”

“Before Bo showed up, Vlad was very hot,” Montoyo said. “Then Bo was so hot people forgot about Vlad. But again that was a big hit from Vlad today.

“The last two days have been awesome for this team, for the young kids, playing the best team in baseball and fighting back.”