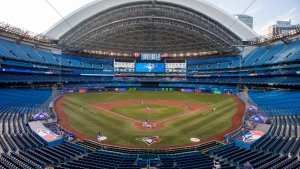 And the team's front office seems to agree.

Bass, who joined the Blue Jays off waivers from the Seattle Mariners in October, says general manager Ross Atkins has told the team they'd prefer to set up home base in a big-league stadium rather than using their triple-A field in Buffalo, N.Y.

“I got a chance to talk with Ross yesterday ... and I just said: 'Look, we want to play in a major-league ballpark, we feel like that's the best opportunity for us.' And he agreed,” Bass said on a video call with reporters Sunday.

“He said: 'I listen to you guys loud and clear. And that's what we're going to do for you because that's what the team wants.”'

The Canadian government denied the Blue Jays' request for permission to play home games at Toronto's Rogers Centre - where they've been training for the last two weeks - saying it's not safe for players to constantly travel over the Canada-U.S. border during the COVID-19 pandemic.

The Blue Jays and teams coming into Toronto for road games would have needed special permission from the government to waive the mandatory 14-day self-isolation period for anyone crossing the border for non-essential reasons.

The federal government's decision came Saturday, less than a week before the start of the 60-game MLB season. The Blue Jays open against the Rays in Tampa Bay on July 24 and their home opener is set for five days later against Washington.

Bass said the team was “definitely surprised” when told the would need to find a new home.

“We were disappointed initially, but at the same time we respect the Canadian government's decision,” Bass said. “We understand what's going on globally. And with that being said, our focus in our direction was we need to put ourselves in the best situation to win. ... And it felt like that was pretty much echoed throughout the clubhouse that we want to be in a major-league ballpark, wherever that is.”

Blue Jays president Mark Shapiro said Saturday that the team has spent more time examining Buffalo in recent days but that the stadium has infrastructure challenges.

Minor-league fields aren't always equipped with proper behind-the-scenes resources - like not enough batting cages for hitters, for example - and they tend to have smaller clubhouses.

But finding a big-league park to play out of would bring its own challenges with the Blue Jays having to share a facility with another team.

While Bass acknowledged there could be downsides to not having a true home stadium, he said the benefits of a major-league park outweigh those, and that the team is “willing to make some sacrifices.”

Outfielder Teoscar Hernandez, meanwhile, says that while he'd prefer a major-league field, it doesn't matter to him where the Blue Jays end up playing their home games.

“It doesn't make a difference because it's a baseball field,” he said. “You're not gonna get the beautiful things they have at major league fields @ some minor-league field, but for me, it's gonna be the same.”

Manager Charlie Montoyo says the Blue Jays will be ready for action this week regardless of where they'll be playing.

Toronto has a pair of pre-season games in Boston before travelling to Tampa, and Montoyo said being able to train in Toronto has ensured his team is - relatively - healthy heading into the season.

“Of course, it's a lot better to play (home games) in Toronto ... to be (in) our home ballpark, but that's not gonna happen,” Montoyo said. “So we're not gonna use it as a built-in excuse. Wherever we go, we're gonna have to play to win, wherever that is.”

Bass, who has a young daughter in a high-risk category for a bad COVID-19 outcome, says the location of Toronto's home field matters both in terms of how ready it is for major-league games and how safe it is.

While earlier reports had suggested the Blue Jays were looking into sharing Tropicana Field with the Rays in St. Petersburg, Fla., Bass said the team would prefer to not be in a COVID “hotspot” like Florida, which reported 10,328 COVID-19 cases Saturday.

“We want to be where it's safe - a place in the United States where cases are going down, or they're very low,” said Bass, who added his family won't be with him this season regardless of where they play.

“So that's definitely a concern of ours.”