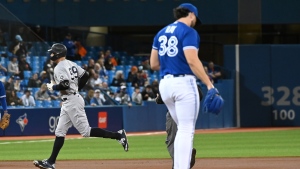 TORONTO - The New York Yankees dealt a blow to Toronto's playoff chances while solidifying their own Thursday night, hitting five home runs in a 6-2 victory over the Blue Jays at Rogers Centre.

Mike Judge hit a mammoth solo shot in the opening frame and added another blast in New York's four-run sixth inning as the Yankees took the rubber game of the critical three-game series.

Anthony Rizzo and Gleyber Torres, with a two-run homer, also went deep in the sixth off Toronto starter Robbie Ray. Brett Gardner added an insurance run with a solo shot in the ninth inning.

Closer Aroldis Chapman, New York's fourth reliever of the night, sealed the win as the Yankees strengthened their grip on the first American League wild-card spot. New York (91-68) has won eight of its last nine games.

The Blue Jays (88-71) fell three games behind the Yankees but remained a game back of Boston for the second wild-card berth.

The Red Sox dropped a 6-2 decision in Baltimore to fall into a tie with the idle Seattle Mariners at 89-70.

Judge's first shot off Ray (13-7) nearly hit the stadium's large video screen well above the wall in centre field. The ball travelled an estimated 455 feet with an exit velocity of 114.6 m.p.h.

Toronto nearly scored another run, but Judge made a nice diving catch on Santiago Espinal's sinking flare to end the inning.

The Blue Jays took the lead in the fifth after manager Charlie Montoyo challenged a call that would have been a inning-ending double play. A video review showed a hustling Marcus Semien beat the throw at first base.

Vladimir Guerrero Jr., then drove him in with a double that was an inch or two away from a home run. The ball hit the top of the wall in centre field and somehow bounced backward into the field of play.

Rizzo tied the game with a rainbow solo shot for his 21st homer of the season. Ray had retired the previous 13 batters in order, going back to a leadoff walk to Gary Sanchez in the second inning.

Judge followed with his 39th home run of the year for a sixth multi-homer game on the season. Giancarlo Stanton walked before Torres ended Ray's night with his ninth home run.

An announced crowd of 29,659 - a sellout under new provincial capacity restrictions - tried its best to boost the home side.

Bichette's leadoff double in the eighth gave the crowd a jolt, but Yankees reliever Chad Green retired the next three Blue Jays with strikeouts.

The Blue Jays close out their regular season with a three-game home series starting Friday against the last-place Orioles. The Yankees go home to play the first-place Tampa Bay Rays.

The Red Sox continue their road trip with a weekend series in Washington while the Mariners finish against the LA Angels.

Notes: Yankees third baseman DJ LeMahieu left the game in the sixth inning due to right hip soreness. ... The game took three hours 29 minutes to play. ... Steven Matz (13-7, 3.88 earned-run average) is scheduled to start Friday for the Blue Jays. Rookie Alek Manoah (8-2, 3.35) is up on Saturday and Hyun Jin Ryu (13-10, 4.39) is set for Sunday. ... The Yankees placed first baseman Luke Voit on the 10-day injured list (left knee inflammation) before the game. ... In honour of Orange Shirt Day, a land acknowledgment and artwork by Philip Cote - an Ancestral Knowledge Keeper from Moose Deer Point First Nation - was installed at locations inside and outside Rogers Centre.

This report by The Canadian Press was first published Sept. 30, 2021.