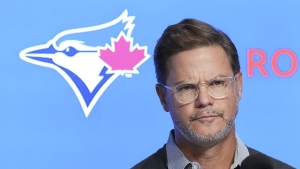 Ross Atkins, Toronto Blue Jays general manager, speaks to the media at the year end press conference, after being swept by the Seattle Mariners in the American League wild card playoff series, in Toronto on Tuesday, October 11, 2022. THE CANADIAN PRESS/Nathan Denette

Just a few days after an epic Game 2 collapse knocked his team out of the playoffs, Blue Jays general manager Ross Atkins said the emotions from the loss "were difficult" for everyone involved.

The Blue Jays had World Series aspirations but instead exited the post-season without recording a single victory, falling in two straight games to the visiting Seattle Mariners.

"We sat in here five days ago and felt very good about us making a deep run and were confident that we had the team to do it, and we didn't," Atkins said Tuesday during a media availability at Rogers Centre.

"So that was a disappointing outcome for us on Saturday."

After a shutout loss in Friday's Game 1, the Blue Jays built an 8-1 lead after five innings in Game 2. Seattle used a pair of four-run frames to pull even and added the go-ahead run in the ninth for a stunning 10-9 win.

The Mariners advanced to play the Houston Astros in the American League Division Series. The Blue Jays were left to search for positives and look ahead to next season.

The team roster is in good shape with a strong young core and most key players under contract. The Blue Jays will likely be in position to spend in the off-season if needed.

One front-burner issue is determining whether John Schneider will have the interim tag removed from his manager title. The 92-win Blue Jays went 46-28 after he replaced Charlie Montoyo in July.

Canada's lone big-league team did return to the playoffs this year after coming just short in 2021. Toronto went 22-11 down the stretch but inconsistency - an issue that plagued the team all season - returned when it mattered most.

Seattle became the third team in Major League Baseball history to come back from a seven-run deficit to win a post-season game.

The Blue Jays do have strong building blocks in place for a franchise that has not advanced to the American League Division Series since 2016.

Alek Manoah emerged as a clear ace of the starting rotation and Jordan Romano of Markham, Ont., cemented his spot as closer. Youngsters Vladimir Guerrero Jr., and Bo Bichette put up strong numbers again to help anchor the team's offence.

Atkins does have a decision to make on pending free agent Ross Stripling, who solidified the rotation when Hyun-Jin Ryu was lost for the season.

Another left-handed bat, bullpen depth and firming up plans for the back end of the starting rotation will be off-season priorities.

"I feel very good about the growth of this group, the foundation that we have and am excited to improve upon it," Atkins said.

The Blue Jays have lost eight of their last nine playoff games. Toronto last won the World Series in 1993.

Also Tuesday, Atkins said that outfielder George Springer suffered a concussion and shoulder sprain on Saturday. He added that Springer was "recovering well" and was expected to be cleared to travel relatively soon.

Springer was hurt when he collided with Bichette as they tried to catch a blooper in shallow centre field. Bichette was shaken up but stayed in the game while Springer was taken off the field on a golf cart.

Atkins said there is “nothing to be concerned about long-term” regarding Springer's injuries. Springer, 33, has four years remaining on his US$150-million, six-year contract.

This report by The Canadian Press was first published Oct. 11, 2022.