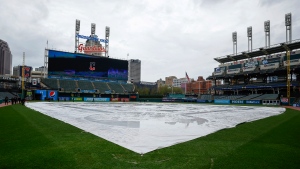 FILE - The tarp sits on the field after a baseball game between the San Diego Padres and the Cleveland Guardians was postponed, Tuesday, May 3, 2022, in Cleveland. (AP Photo/Ron Schwane)

CLEVELAND (AP) - Friday night's game between the Toronto Blue Jays and Cleveland Guardians has been postponed because of rain.

The Guardians have had four home games called off by inclement weather this season. Friday's game was postponed 3 1/2 hours before the scheduled first pitch.

The teams will play a doubleheader - Cleveland's third of the season at Progressive Field - Saturday beginning at 2:10 p.m. EDT. Toronto's Kevin Gausman (2-1, 2.27 ERA) was scheduled to start against Shane Bieber (1-1, 2.45 ERA) on Friday night.

Steven Kwan's first major league home run led Cleveland to a 6-5 win in Thursday's series opener, the majority of which was played in a steady rain. The Guardians have won five of six after losing seven in a row.

Vladimir Guerrero Jr. and Alejandro Kirk homered for Toronto, which has lost three of four.

Cleveland's game against San Diego on Tuesday also was rained out, forcing a doubleheader Wednesday. The Guardians' games against the Chicago White Sox on April 18-19 also were postponed.