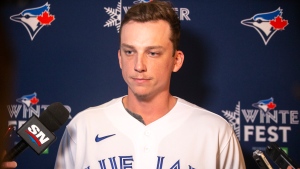 Toronto Blue Jays' Ryan Borucki scrums with the media during their Winter Fest celebration in Toronto on Saturday January 18, 2020. THE CANADIAN PRESS/Chris Young

DUNEDIN, Fla. -- The Toronto Blue Jays are being cautious with Ryan Borucki to start spring training after the left-hander complained of elbow tightness in his throwing arm earlier this week.

Blue Jays manager Charlie Montoyo said Friday at camp that Borucki experienced the tightness after throwing off a mound a couple days ago.

Borucki dealt with elbow problems all of last year, beginning at spring training, and made just two starts in the majors in 2019.

The 25-year-old had surgery on the elbow in August to remove bone spurs.

Borucki also had Tommy John surgery while in the minor leagues in 2012, forcing him to miss the entire 2013 season.

Montoyo and Atkins both said the team is taking a more cautious approach because of Borucki's history.