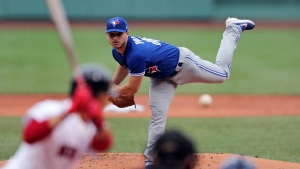 Toronto Blue Jays starting pitcher Thomas Pannone delivers during the first inning of a baseball game against the Boston Red Sox at Fenway Park in Boston, Thursday, July 18, 2019. The Blue Jays will open their 2020 season with a four-game home series against the division rival Boston Red Sox.THE CANADIAN PRESS/AP/Charles Krupa

TORONTO -- The Toronto Blue Jays will open their 2020 season with a four-game home series against the division rival Boston Red Sox.

The Major League Baseball club released its schedule for next season on Monday.

The Blue Jays will be at home for four long weekends, with key games on Victoria Day against Houston, Canada Day versus the Chicago White Sox and the Aug. 3 Civic Holiday against Tampa Bay.

Blue Jays fans in Vancouver can look forward to a three-game series against Seattle July 24-26.

Toronto will close out their home schedule against the New York Yankees Sept. 18-20, before wrapping up the regular season with a road trip to Boston Sept. 22-24.