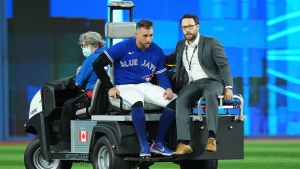 Toronto Blue Jays outfielder George Springer has had a bone spur removed from his right elbow.

The club announced on Thursday that the operation in Dallas was a success.

The nagging injury in Springer's dominant arm bothered him for most of the season and limited his play.

Despite this, he had a .267 batting average with 25 home runs, 76 runs batted in, 14 stolen bases and was named a nominee for the Silver Slugger award earlier Thursday.

A Blue Jays spokesman says Springer is expected to make a full recovery and be ready in time for spring training.

Springer was carted off the field in Toronto's 8-7 collapse against the Seattle Mariners in Game 2 of the American League wild card series.

He was concussed when he collided with Blue Jays shortstop Bo Bichette in shallow centre field chasing down a flyball.

This report by The Canadian Press was first published Oct. 27, 2022.