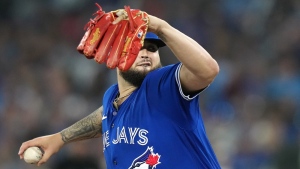 Toronto Blue Jays right-hander Alek Manoah has been named to the all-MLB first team on Monday.

Manoah posted a 16-7 record while boasting a 2.24 earned run average, good for fourth in the major leagues and third in the American League.

The 24-year-old was also a finalist for the American League Cy Young Award and was named an all-star for his efforts in just his second season.

Toronto finished the regular season 92-70 before getting ousted in the AL wild-card round by the Seattle Mariners.

Manoah was the lone Blue Jay to make either the first or second team after Toronto had three players honoured in 2021.