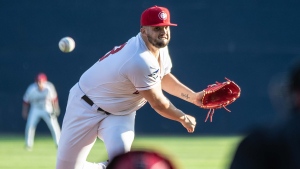 Alek Manoah is shown in this undated handout image. Like many sports fans, Manoah is paying close attention to the Toronto Blue Jays current crop of young talent. THE CANADIAN PRESS/Mark Steffens

The team's future is bright with the likes of Bo Bichette and Vladimir Guerrero Jr. smashing club records in their rookie seasons.

And it's a future that Manoah -- the Jays' first-round pick in this year's MLB draft -- sees himself playing a big part in.

"It's extremely exciting, especially thinking that we can all be together for the next, hopefully, 10, 12 years, make some playoff pushes and win some World Series," said the 21-year-old right-handed pitcher. "So being a part of that and hopefully a main nucleus, it's a dream come true, honestly."

Plus, watching the young guns play is entertaining.

"I'm a fan, just like everyone else," he added with a wide smile.

It's been a summer of change for Manoah.

He was selected 11th overall by Toronto on June 3, just a day after his college career at West Virginia University came to an abrupt end with an 11-10 loss to Texas A&M in the regional playoffs.

Manoah had put in a big junior year with the Mountainers, compiling a 9-4 record with a 2.08 earned-run average through 16 starts (108 1/3 innings), and recording 144 strikeouts and 27 walks. The performance earned the six-foot-six, 260-pound athlete the title of Big 12 Conference Pitcher of the Year.

After signing a contract reportedly worth more than US$4.5 million in July, Manoah spent some time training with fellow prospects at the Blue Jays off-season facility in Dunedin, Fla. before he was assigned to one of the club's minor league affiliates, the Vancouver Canadians in B.C.

Getting up to Canada took some time, however, as the Miami native had to first get a passport.

His professional debut came on July 27 when Manoah started for Vancouver against the Indians in Spokane. His first pitch was a strike.

Manoah went on to throw three innings in his next six games, allowing two hits and forcing 12 strikeouts.

So far, adapting to life as a professional baseball player has been relatively smooth, he said.

"The only adjustment I've had to make is not worrying about classes," said Manoah, who's still working on a degree in communications. "It's just wake up, baseball, go to sleep, then wake up, baseball again."

During the off-season, he plans to return to West Virginia to take some more classes and train with the team before heading home to Miami.

For now though, he's playing and training with the Canadians, focusing on his off-speed pitches, including the change-up he rarely broke out in college. He also has a slider and throws a fastball in the 94-97 mph range, according to MLB Pipeline.

Because he played so much college ball this year, the club's trainers and staff have curtailed the young pitcher's work on the mound through the tail-end of the Northwest League's season.

The limited play hasn't been easy for the self-described "extremely competitive" Manoah.

"It's one of the hardest things I've ever had to do, honestly. Because I just want to pitch the whole game," Manoah said, adding that he's been known to argue with coaches who try to pull him from play.

But he knows the team is looking out for his best interests and trying to save him from serious injury.

"Obviously, the organization, they know what they're doing. And I have trust in them. There's no rush right now," he said.

The Jays' approach to the future and molding young talent is part of what drew Manoah to the club. He met with "a few" different teams ahead of the draft, but said his time with people from Toronto's front office was something special.

Afterward, Manoah immediately texted his agent, saying he thought the Jays would be a perfect fit. He liked that the organization wanted to tailor training and growth to specific players instead of using a one-size-fits-all approach.

"They really put a lot of effort and a lot of work into making sure everyone is comfortable with the routine," he said.

Manoah believes in the base the Jays' front office is building and hopes it's one that can support the team's success for a long time.

While Bichette and Guerrero have caught fans attention in recent months, there are a number of talented young guys coming up through the organization, including a number of great players currently with the Canadians, Manoah said.

"It's just a bunch of guys that are waiting to get their chance as well," he said.

"I think we're all extremely motivated. … I think all of us working together and knowing that we're part of a movement, I think that excites everyone that's part of the organization."