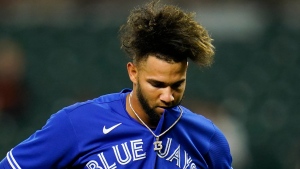 Toronto Blue Jays' Lourdes Gurriel Jr. leaves the game after a play at first base against the Baltimore Orioles during the second inning of a baseball game, Wednesday, Sept. 7, 2022, in Baltimore. Gurriel Jr. left the game. (AP Photo/Julio Cortez)

The Toronto Blue Jays placed outfielder Lourdes Gurriel Jr. on the 10-day injured list on Friday due to a left hamstring strain.

The move is retroactive to Thursday. Gurriel exited Wednesday's 4-1 win over the Baltimore Orioles in the second inning with the injury.

Toronto (76-60) has won six of its last seven games entering the first of a three-game series against the Texas Rangers on Friday night.

The team also announced that infielder Otto Lopez has been recalled from triple-A and will be active on Friday.

This report by The Canadian Press was first published Sept. 9, 2022.