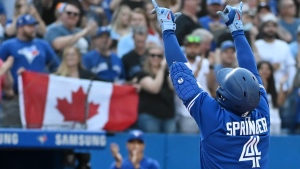 Toronto Blue Jays' George Springer (4) celebrates after a solo home run in the second inning of an American League baseball game against the Baltimore Orioles in Toronto on Saturday, Oct. 2, 2021. THE CANADIAN PRESS/Jon Blacker

He hit his 47th homer, one of five home runs for Toronto in a 10-1 clobbering of the Baltimore Orioles. The victory kept the Blue Jays' playoff hopes alive going into a dramatic final day of the regular season.

A Toronto win and a loss by either the New York Yankees or Boston Red Sox on Sunday means the Blue Jays would be part of a tiebreaker for the American League's second wild-card slot.

Undoubtedly, the enthusiastic 22-year-old Guerrero is excited about the final day of the regular season and all its possibilities, right?

“No, not yet,” he said. His first-inning, two-run blast tied Eddie Mathews' 68-year-old record for most homers by a player 22 or younger.

“We don't have the pressure. The pressure is on them,” said Guerrero Jr., the AL MVP candidate. “We're going to continue to go out there like we've been doing since the beginning of the season, working pretty hard every day.

The Yankees were throttled at home 12-3 by the Tampa Bay Rays, while the Red Sox defeated the Washington Nationals 5-3 on the road. The Seattle Mariners (89-71) also were still alive, but they did not play until late Saturday.

There is the possibility of a three-way or even four-way tie for the two AL wild-card slots. In either case, two tiebreaker games would be required.

If there is a four-way tie, there would be two tiebreaker games on Monday, with the winners advancing to the wild-card game on Tuesday.

“The level of confidence that we're playing with right now is amazing,” said Blue Jays starter Alek Manoah (9-2), who struck out 10 for his fourth win in a row. “Everything's kind of clicking - our bullpen, our starters, on offence, from top to bottom.

The Blue Jays' blue homer jacket received quite the workout with the five long balls. Manoah also was asked by his teammates to slip it on after his impressive seven-inning, 89-pitch outing.

“It was a little short on the arms, but it felt good,” Manoah joked.

The Blue Jays led 3-0 after the first inning and 6-1 after two as they improved their record to 24-11 at Rogers Centre and 21-9 in September and October, tops in the AL during that period.

“To get 90 wins playing in the American League East with playing on the road (until August), and now we're down to Game 162, I'm so proud of these guys,” Toronto manager Charlie Montoyo said.

“We could have quit playing our home games in Dunedin with the wind blowing out. We could have quit when we moved to Buffalo. But nobody complained because they love playing the game. We deserve to be in this situation because we never quit.

“And it's still a young team.”

This report by The Canadian Press was first published Oct. 2, 2021.