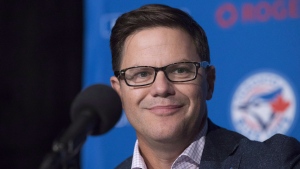 Atkins was hired by the Blue Jays in December 2015 after spending 15 seasons in Cleveland's front office.

The 47-year-old Atkins is the seventh GM in franchise history.

The Blue Jays are off to a 3-2 start this year.

"Coming to Toronto with my family has enriched our lives in countless ways and having the opportunity to remain a Blue Jay is something I do not take for granted," Atkins said in a statement.

Shapiro praised Atkins for his work.

"Simply put, Ross makes the Blue Jays better. I am extremely pleased that he will continue leading our baseball operations group during this exciting era for our players, staff, and most importantly, our fans, as we move closer to building a sustainable championship contender for years to come," Shapiro said.

This report by The Canadian Press was first published April 6, 2021.