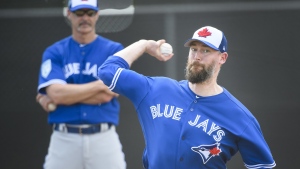 MILWAUKEE (AP) -- Reliever John Axford's comeback attempt is taking a detour from Toronto to Milwaukee, where the veteran right-hander started his major league career and had his greatest success.

Brewers president of baseball operations David Stearns announced Monday the team had acquired the 38-year-old Axford from the Blue Jays for cash considerations.

Axford hasn't pitched in the major leagues since 2018 and began this season as a studio analyst on the Blue Jays' television broadcast crew. After pitching for Canada in an Olympic qualifier, Axford signed a minor league contract with the Blue Jays on June 24.

He went 1-0 with an 0.84 ERA in nine relief appearances for the Blue Jays' Triple-A Buffalo affiliate. Axford struck out 14 batters and allowed three walks and two hits in 10 2/3 innings. Opposing batters were hitting just .061 against him.

Although Major League Baseball's trade deadline was Friday, this move was still allowable because Axford is a minor league player who wasn't on anyone's 40-man roster.

The 38-year-old Axford pitched for the Brewers from 2009-13 and set a team record by collecting 46 saves in 2011. During that 2011 season, Axford had a franchise-record 43 consecutive saves without a blown opportunity.

Axford collected 106 saves during his five-year stint in Milwaukee and ranks second to Dan Plesac (133) on the franchise's career saves list.

Axford will wear No. 59, the number he wore during his previous stint with the Brewers. Bench coach Pat Murphy is switching his jersey number from 59 to 00.

The addition of Axford marks the NL Central-leading Brewers' latest move to boost their bullpen. They acquired left-hander Daniel Norris from the Detroit Tigers and right-hander John Curtiss from the Miami Marlins on Friday.