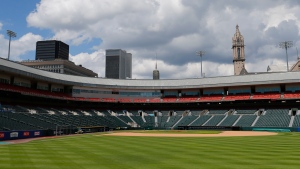 TORONTO - The Toronto Blue Jays won't play a home game in Buffalo, N.Y., until next month.

The Blue Jays said Sunday that Sahlen Field won't be used for a major-league game before their series against the Miami Marlins starting Aug. 11.

Toronto is using its triple-A affiliate's stadium as its home base this season after being denied permission to play at Rogers Centre by the federal government during the COVID-19 pandemic. The Blue Jays are upgrading the Bisons' field to bring it up to major league standards.

Toronto was supposed to host the Washington Nationals for two games Wednesday and Thursday, then host the Philadelphia Phillies from Friday to Aug. 2.

Those five games will instead be played at the home stadiums of the Nationals and Phillies, respectively, with Toronto designated as the home team.

The location of the Blue-Jays-Phillies games was announced Sunday. The Jays had previously announced they'd stay in Washington for a pair of home games after a two-game road series against the Nationals on Monday and Tuesday.

The Blue Jays will now play their first 16 games of the 60-game season away from Buffalo.

The Blue Jays had attempted to find a major-league home that they would share with another team before the 60-game season started - trying both the Pittsburgh Pirates and Baltimore Orioles - but were turned away by the Pennsylvania government before the clock ran out on their bid with Maryland hours before their season opener at Tampa Bay.

The Canadian government would not allow the team permission to play in Toronto due to the constant travel between that Canada-U.S. border.