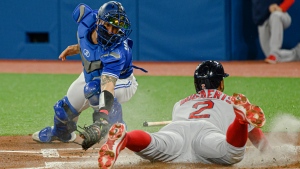 The Blue Jays managed just five hits in all. It was Toronto's second loss in its last eight games.

Bogaerts fouled a pitch off his left shin in the first inning but stayed in the game after meeting with the team trainer. He would reach on an infield single and scored on a double by Devers.

Boston (8-11) threatened again in the third inning after loading the bases with three singles. Toronto starter Ross Stripling fanned Devers and J.D. Martinez to keep it a one-run game.

Toronto (12-7) caught a break in the bottom half of the frame when Boston second baseman Trevor Story bobbled a tailor-made double play ball from Bo Bichette, leaving runners on the corners with one out.

Vladimir Guerrero Jr., brought home Tyler Heineman with Toronto's lone run on a slow roller to Bogaerts at shortstop, who went to second for the force.

Bogaerts and Devers were at it again in the sixth inning with back-to-back singles off reliever Trent Thornton (0-1). Bogaerts scored on a Martinez flare to shallow right field and Kike Hernandez hit a sacrifice fly that scored Devers without a throw home.

George Springer, who delivered a game-tying homer in the ninth inning a night earlier, lashed a two-out single in the seventh to move Santiago Espinal to third base. But Hirokazu Sawamura struck out Bichette to end the threat.

Boston tacked on two insurance runs in the eighth off Julian Merryweather. Hernandez drove in Martinez with a double before scoring himself on a sacrifice fly by Bobby Dalbec.

Triple-A call-up Andrew Vasquez and Bowden Francis -- who made his big-league debut -- pitched the ninth inning for Toronto as Boston sealed the rout with two more runs.

Stripling struck out seven and allowed five hits and one earned run over five innings.

Boston manager Alex Cora was back on the bench Wednesday after missing six games because of COVID-19.

The Red Sox went 1-5 under bench coach Will Venable while Cora recovered at his Boston home.

Toronto backup infielder Gosuke Katoh doubled in the fourth inning for his first big-league hit. He made his major-league debut on April 9.

Blue Jays left-handed reliever Ryan Borucki was added to the 10-day injured list due to a blister on the middle finger of his pitching hand. He was on the IL earlier this month due to a strained right hamstring.

The Blue Jays will have a chance to tie a franchise record this weekend when the Houston Astros are in town for a three-game series.

Toronto's win over Boston on Tuesday guaranteed that the Blue Jays will not lose this four-game series against the Red Sox. The Blue Jays have won or split their first six series to start a regular season, one short of the team mark set in 1992.

Toronto started the day in the big-league lead with 26 homers this season. The Los Angeles Angels were next with 24.