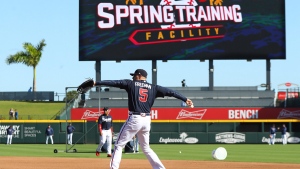 NORTH PORT, Fla. -- Freddie Freeman hopes to return to the Atlanta Braves lineup next week after his surgically repaired right elbow swelled and forced him out of action a few days ago.

The four-time All-Star had three loose bodies removed from his elbow in October to address years-long pain that caused an ill-timed slump last season. Freeman arrived at spring training saying he felt better than he had in years, but the elbow ballooned Monday after he put in a particularly long day Sunday.

Freeman sent images and spoke by phone to Dr. David Altchek, the surgeon who operated on his elbow. Altchek assured him the swelling was not a concern. Freeman said the discomfort wasn't nearly as bad as last season, when he struggled with basic tasks like shampooing his hair.

"It swelled pretty good, but I knew right away," he said Thursday. "I could straighten my arm, I could flex it, no problems. The swelling went down drastically even that day. Just a little treatment, I feel good. Going to take it day by day, but probably next week I should be in the lineup."

The 30-year-old Freeman batted .295 last season and set career highs with 38 homers and 121 RBIs. He slumped in September when the elbow was at its worst, hitting .235 with no home runs in his final 21 games, then batted .200 in five post-season games as Atlanta lost to St. Louis in an NL Division Series.

The lefty-hitting, righty-throwing Freeman was hitting three times a week and throwing five times a week by the end of the off-season, then opened camp at full bore. He felt fine until waking up Monday, when he was scratched from the lineup for a game against Toronto.

When he returns, Freeman said he'll likely cut down on some of his pregame work load.

"I'm kind of glad it happened in February," he said. "Now I can get all the swelling out, which it already is out, and we can work our way back into the lineup."