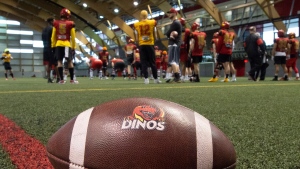 CALGARY - The Vanier Cup will become part of Grey Cup again if the CFL commissioner gets his way.

“The opportunity to bring Grey Cup and Vanier Cup together is a very real possibility,” Ambrosie told The Canadian Press.

“There are some details to be worked out, but it is something we're committed to working towards.”

“I don't think it's out of line to say we'd like to see it happen as early as next year in Saskatchewan. I always try to be as ambitious as I possibly can so 2020 looks perfectly good to me.”

The 2019 Vanier Cup featuring the Calgary Dinos and Montreal Carabins is Saturday in Quebec City.

“The CFL has done an amazing job of creating that five-day festival football experience and lots going on,” he said.

“At the end of the day, you need to have fans in the stands and the partnership with the CFL and aligning Grey Cup and Vanier Cup pretty much assures that. That is really important to us right now.”

The Vanier Cup was played in the Grey Cup host city two days before the CFL's championship game in 2012 and 2007 in Toronto, and 2011 in Vancouver.

The Laval Rouge Et Or and McMaster Marauders met in both games with each winning a title.

Defensive lineman Ben D'Aguilar, a CFL alum of the Calgary Stampeders and Tiger-Cats, played in both Vanier Cups for McMaster.

“It's almost like an opening act for a top rock star,” D'Aguilar recalled. “For us, as players, I feel like it amplified the experience.

“A lot of us were trying to go to the CFL, so it's cool to kind of set the stage for them and really see what it's all about first hand.

“I remember coming out of the locker room and going out onto the field and feeling 'man, this is big time,”' D'Aguilar said.

“McMaster, I think we had a five-thousand seat capacity stadium and we'd only ever sell three thousand so to have thirty-some thousand people show up to the game, it was pretty cool. It felt like that's the stage we deserve to have.”

Television rights and scheduling are hurdles to be cleared, however.

CFL rightsholder TSN also had Vanier Cup rights in 2011 and 2012, so meshing the two properties worked.

But the Vanier rights were transferred to Sportsnet for several years until this year.

Whether TSN would insist on having Vanier Cup rights, or is willing to allow a CBC property into one of its biggest weeks, is unclear.

The 2020 Grey Cup in Regina on Nov. 22 is scheduled a week earlier than the Vanier Cup, Brown said.

“By moving it a week earlier next year, it's very difficult for our leagues to finish a week earlier,” he explained. “We already start football two weeks before university classes start.

“Right now, all of our conferences are looking at how we could adjust our schedules to accommodate the alignment of the Grey Cup and Vanier Cup a week earlier. Tons of work is going on this right now. I hope we can get over the line. The conferences have got to ultimately support this.”

Quebec City's Laval University will host the Vanier for the fourth time in seven years at its 12,000-seat stadium Saturday.

The Dinos understandably would have liked to be included in the Grey Cup in their home city.

But former Laval running back Patrick Lavoie from Saint-Flavie, Que., has mixed feelings about locking in an annual Grey-Vanier combo in a CFL city.

The Saskatchewan Roughrider helped the Rouge et Or win the Vanier Cup in Vancouver in 2011.

“We pretty much had the Grey Cup week experience right there,” Lavoie recalled. “When you bought a ticket for the Grey Cup, you got tickets to the Vanier too so there was a lot of people.

“The Vanier Cup being in the same city as the Grey Cup was a great experience, but I want the Vanier Cup in Quebec City.”

Darren Haynes contributed to this story.