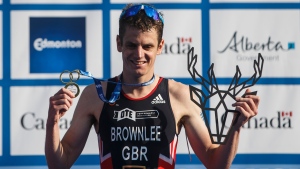 Jonathan Brownlee of Great Britain holds up the trophies after the win of the Elite Men's event at the ITU World Triathlon Series in Edmonton on Saturday, July 20, 2019. THE CANADIAN PRESS/Jason Franson

EDMONTON - Britain's Jonathan Brownlee cruised to victory in the World Series triathlon Saturday, capturing his first gold on the circuit in two years.

“It's about time isn't it?” Brownlee, 29, laughed moments after he pumped his fist and punched the finish line tape as he crossed the line to win the sprint race at Hawrelak Park in Edmonton's River Valley.

“I'd be lying if I said it didn't hurt, people saying maybe he's past it,” said the two-time Olympic medallist, referring to his recent injuries and inability to win gold since 2017.

“But I still believe I can have may best races in years to come.

“I'm getting there now.”

Brownlee, ranked 41st on the WTS standings heading into Edmonton, stayed with the leaders in the swim and cycling legs, then pulled away comfortably to win the final 5-km run.

He finished the sprint race in 54 minutes and 52 seconds, five seconds ahead of Spain's Mario Mola.

Belgium's Marten Van Riel was third, 10 seconds off the pace.

Mola came from behind to pull close to Brownlee but ran out of real estate.

Mola said the fact Van Riel, Brownlee, Vincent Luis, Matthew Hauser and Ben Kanute built up a big lead in the cycling portion made it impossible to catch all of them in the run.

“Those guys did amazing work in the front,” said Mola. “I did my best.”

France's Luis, the WTS series leader, appeared poised to build on his points lead, leading the field out of the water and after the cycling, but faded in the run and finished fifth, 21 seconds back.

The 24-year-old from Oak Bluff, Man., was eighth after the swim, 13th after the bike portion and finished ninth, 41 seconds back.

“I got a big stomach stitch on the run. I made the best out of it and battled back. I wish I could have given Edmonton more.”

Earlier Saturday, Australia's Emma Jackson came from behind to outduel American Summer Rappaport on the final lap to win the women's elite event.

Jackson recorded a time of one hour, one minute and 23 seconds, two seconds up on Rappaport.

It was the first WTS win for Jackson, who has been dealing with nagging injuries for the last two years to her right foot and left quad.

“It's been a bit all over the place, but to come back and win my first WTS is definitely amazing,” said Jackson.

“It's been about three years since I've really raced properly.”

Jackson, 27, said she was behind after the swim portion, but then found her legs on the bike before breaking the tape in the run.

Rappaport, who won gold in Edmonton in 2016, led out of the water, stayed with the lead pack in the cycling portion then duelled Jackson and Gentle for the lead on all three laps of the final run.

It's the third WTS podium for Rappaport, 27, this season. She won silver in Yokohama and bronze in Hamburg.

Canadian Amelie Kretz of Blainville, Que. was 38th among the 41 competitors.