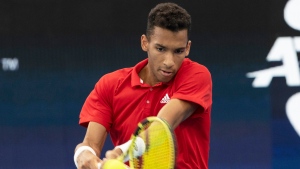 MELBOURNE, Australia - Felix Auger-Aliassime, the top-ranked Canadian at the Australian Open, will face Finland's Emil Ruusuvuori in the first round of the first tennis major of the year.

The 21-year-old from Montreal is ranked ninth in the world compared to No. 90 for the 22-year-old Finn. But Ruusuvuori showed little respect for the numbers at last year's Miami Open when he upset world No. 7 Alexander Zverev of Germany 1-6, 6-3, 6-1 in second-round play for only his second career win over a top-10 opponent.

Auger-Aliassime reached the semfinals at the U.S. Open, his last major, where he lost to eventual champion Daniil Medvedev of Russia. The Canadian made it to the fourth round of last year's Australian Open before losing to Russian Aslan Karatsev.

Auger-Aliassime, who captained Team Canada to the ATP Cup in Sydney last week, could face another Russian, fifth seed Andrey Rublev, in the fourth round this year.

He could face Zverev, seeded third, in the fourth round.

Fernandez, seeded 23rd this year, was knocked out in the first round by No. 18 seed Elise Mertens in Melbourne last year. But she went on to reach the final of the U.S. Open before losing to Britain's Emma Raducanu.

Vancouver's Rebecca Marino won her first two qualifying matches and will make the main draw with a victory over Russia's Kamilla Rakhimova.