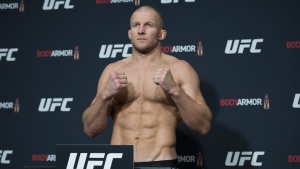 Cirkunov, returning to fight at 205 pounds after trying his hand at middleweight, has now lost four in a row.

It was the second consecutive first-round KO victory for Menifield (13-3-0), who has won four of his last five fights. Menifield improved to 6-3-0 in the UFC.

"More of that is going to come, for sure," said Menifield, who has 10 first-round wins and 10 knockouts.

Cirkunov (15-9-0) tried unsuccessfully for a couple of early takedowns against the aggressive, free-swinging Menifield. Cirkunov was cut around the left eye from one of the exchanges.

The end came quickly with Menifield stunning Cirkunov with a left hook to the head. He then felled the six-foot-three Canadian with a right uppercut, adding two hammer-blows to the prone Cirkunov before referee Mark Smith stepped in.

The Toronto native, who trains out of Las Vegas, won his first four UFC fights but has since lost seven of his last nine.