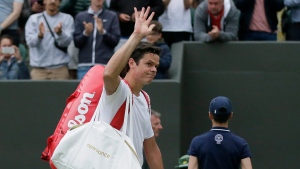 Canada's Milos Raonic has pulled out of this year's U.S. Open due to injury. (File/AP Photo/Tim Ireland)

TORONTO -- Canada will not have Milos Raonic on its roster for the inaugural Davis Cup Finals next week in Madrid because of a back injury.

The veteran pro from Thornhill, Ont., has struggled with injuries in recent years. Raonic missed the U.S. Open because of a back injury and has played just three official matches this fall.

"It is very hard and disappointing for me that I will not be able to represent my country at Davis Cup," Raonic said Monday in a statement. "My health has continued to let me down through this entire year and now once again. I will take the appropriate time to get healthy and I look forward to being back on court next season."

Brayden Schnur of Pickering, Ont., will replace the 31st-ranked Raonic. Schnur has climbed 100 spots in the rankings this year and is currently at No. 94.

Schnur will be joined by No. 15 Denis Shapovalov of Richmond Hill, Ont., No. 21 Felix Auger-Aliassime of Montreal and No. 149 Vasek Pospisil of Vancouver.

"I'm very happy to be able to play in the Davis Cup Finals but, of course, I first want to wish Milos a speedy recovery," Schnur said. "It's an honour for me to represent Canada in this team competition."

Canada faces Italy on Nov. 18 and the United States on Nov. 19 in Group F play.

The winners of the six groups and the next two best teams advance to the quarterfinals.

This report by The Canadian Press was first published Nov. 11, 2019.