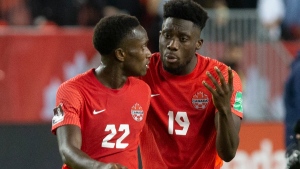 TORONTO - Richie Laryea calls it “one of the biggest forms of disrespect.”

The Canadian wingback was referring to the act of spitting at someone, the way he was targeted by a Panama player late in Canada's 4-1 win in CONCACAF World Cup qualifying play Wednesday.

Laryea stopped the game in the 89th minute while attempting to take a throw-in at centre field on the east side of BMO Field. Moments earlier, Panama winger Edgar Barcenas had retrieved the ball and flipped it to Laryea before backing away.

Laryea suddenly dropped the ball and raised his hands in the air as fans in the seats behind him rose in anger.

“I grabbed the ball. I was looking to throw it in and the guy had spat towards me,” Laryea said in an interview Friday. “I know a couple of the fans right behind saw it because they had jumped out of their seats and were yelling at the ref. And the same with one of the guys on the team - (Canadian captain) Steven Vitoria jumped up and went to the ref because he saw it as well.

“Obviously that's something you don't want to see in the game ... I know there's frustration from (Panama's) end, being up 1-0 to it being 4-1 and all that. So I get that. But there's no place for anyone trying to spit on someone.”

Laryea said American referee Armando Villarreal and the assistant referee on that side missed the incident.

“They were kind of telling me 'Oh yeah, we believe you but we can't do anything about it because we didn't see it,”' said Laryea. “Obviously I wouldn't make something like that up. I was enjoying myself playing. We were happy, we're winning 4-1. I had nothing to be angry about. But when somebody does something like that ... I was lucky he had missed me. But not by much.”

Barcenas held his hands up, protesting his innocence as Canadian players complained. Play eventually continued without any sanctions.

The incident triggered a melee after the final whistle with Laryea still steamed over the incident. The Toronto FC player, who eventually had to be pulled away by teammates, could be heard on the TV broadcast asking a match official to review the video.