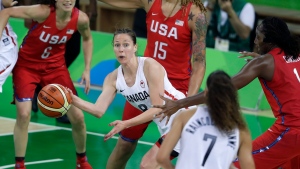 Canada guard Kim Gaucher passes while defended by the United States during the second half of a women's basketball game at the Youth Center at the 2016 Summer Olympics in Rio de Janeiro, Brazil, Friday, Aug. 12, 2016. Two-time Olympian Gaucher and WNBA rookie Bridget Carleton headline Canada's women's basketball team for the FIBA AmeriCup 2019. THE CANADIAN PRESS/AP/Carlos Osorio

The tournament that opens Sunday in San Juan, Puerto Rico, is the first step in qualifying for the 2020 Tokyo Olympics.

“Following a productive training camp at home in the City of Edmonton, we're excited to compete with the top teams in the Americas,” said head coach Lisa Thomaidis.

Canada, ranked fifth in the world, is in Group A with Dominican Republic, Cuba, Mexico, and hosts, Puerto Rico.

“The FIBA Women's AmeriCup is always a great opportunity for our women's team to compete against the best in our zone,” said Denise Dignard, Canada Basketball's director of women's high performance. “We are looking forward to seeing our team in action as this will be valuable and great stepping stone as part of the new FIBA Olympic qualification system.”

The Canadians open against Mexico on Sunday, then play Cuba on Monday, Puerto Rico on Tuesday, and the Dominican Republic on Sept. 26. The semifinals and final are Sept. 28 and 29, respectively.

Canada is the two-time defending FIBA AmeriCup champion, and has climbed the medal podium in seven of the last eight AmeriCup tournaments.

The top two teams from each group advance to the semifinals, with the winners of each semifinal advancing to the Sept. 29 final.

The pre-qualifying Americas tournaments will qualify the top four teams for the four global qualifying tournaments, which will be held in February of 2020. Canada needs a top-three finish in its group in February to earn a Tokyo Olympic berth.

Canada's women's team ended a 12-year Olympic hiatus in qualifying for the 2012 London Olympics. The women also played in the 2016 Rio Olympics. They were eliminated in the quarterfinals in both.