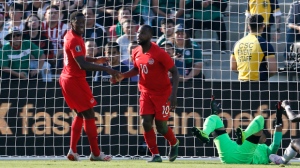 PASADENA, Calif. -- Jonathan David scored twice in his Gold Cup debut, helping Canada to a 4-0 win over Martinique in the Group A opener at the Rose Bowl on Saturday.

Junior Hoilett and Scott Arfield also scored, as Canada got its first win in the Gold Cup since defeating French Guiana 4-2 in the opener of the 2017 tournament. It was also the sixth consecutive win for Canada in all competitions, outscoring opponents 27-1 in that span.

David, the 19-year-old forward for Kaa Gent in the Belgian First Division, put Canada ahead 1-0 in the 33rd minute when he pounced on a mistake by Martinique as it tried to build out from the back. Daniel Herelle could not control a pass from goalkeeper Loic Chauvet and David collected the loose ball, calmly scoring into the left corner after charging in on goal and forcing Chauvet down to one knee.

David made it 2-0 in the 53rd minute, boosting his tally to six goals in his first five matches with the senior national team. Kept onside by midfielder Karl Vitulin, David was able to collect a long ball over the top from Samuel Piette and score on a breakaway.

Hoilett extended the lead to 3-0 in the 63rd minute off a cross from David to the far post. Hoilett's initial shot was saved by Chauvet, but the rebound struck Hoilett in the knee and went in for his sixth international goal.

Arfield got the final goal in the 67th minute on a shot from outside the penalty box into the far right corner.

Canada goalkeeper Milan Borjan made two timely saves late in first half the against Kevin Parsemain, Martinique's all-time leader in goals. Borjan stopped a shot with his feet in the 44th minute when Parsemain accelerated past the Canadian defence for a breakaway, and the Red Star Belgrade keeper parried away another chance by Parsemain in stoppage time after he picked off a poor pass by Piette.

Canada won for the second time in its past 11 Gold Cup matches after failing to win any of its six matches in the 2013 and 2015 editions, losing three and drawing three.

Canada had not defeated Martinique in two previous Gold Cup group stage matches, including a 1-0 loss at the Rose Bowl in the 2013 tournament, and failed to advance to the knockout stage on both occasions.