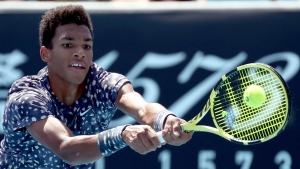 The 19-year-old from Montreal defeated French veteran 7-5, 7-6(2) on Saturday to reach the final of the Open 13 Provence men's event. Auger-Aliassime saved two-of-three break points en route to his 12th win in 19 matches this season.

Auger-Aliassime dropped a 6-2, 6-4 decision to France's Gael Monfils last weekend in the final of the ABN AMRO World tennis tournament in Rotterdam.

Auger-Aliassime rallied from a break down to win the first set in just over an hour. After Simon held serve to go up 6-5 in the second, Auger-Aliassime did the same emphatically at love to force the tiebreaker.

The Canadian finished with fives aces in the match - Simon had one - and won 79 per cent of points on his first serve compared to 67 per cent for his opponent. Auger-Aliassime converted two-of-six break opportunities while Simon was one-for-three.

Tsitsipas advanced with a 7-5, 6-3 semifinal victory against Alexander Bublik. The second seed from Greece had six aces and broke his strong-serving Kazakh opponent's serve three times, dropping his own once.

Playing only his third semifinal at this level, Bublik competed well and hit eight aces.

The 21-year-old Tsitsipas will aim for his fifth career title when he faces Auger-Aliassime.

The Associated Press contributed to this report