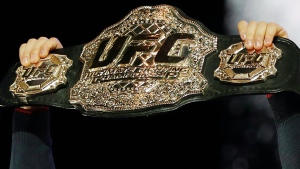 Muhammad (the Punisher) Mokaev submitted Canadian flyweight Malcolm (X) Gordon with 34 seconds remaining in the third round on the UFC 280 undercard Saturday.

The unbeaten Mokaev, who was born in Russia but fights out of Manchester, England, was a minus-1200 favourite to win. And while he dominated on the ground, he failed to do much damage from top position.

Gordon (14-6-0) proved to be a prickly opponent with a sound defence off his back. He resisted Mokaev until the dying seconds when the two fighters tangled at the fence. Mokaev (9-0-0 with one no-contest) locked in an armbar, forcing Gordon to tap.

"To be honest I underestimated this guy," said the 22-year-old Mokaev, an accomplished wrestler. "I can't do this any more when there's 10 years (age) difference.

"But I know I'm comfortable on the ground everywhere. This guys's a black belt (in Brazilian jiu-jitsu). I just got my purple belt. I don't give a (expletive) what belt he has."

Mokaev was credited with 10 minutes 18 seconds of control time, compared to 2:49 for Gordon.

The main event at Etihad Arena featured Brazil's Charles (do Bronx) Oliveira against Russia's Islam Makhachev for the lightweight title that became vacant when Oliveira failed to make weight last time against American Justin (The Highlight) Gaethje at UFC 274 in May. Oliveira won that bout but lost his championship belt after weighing a half-pound over the 155-pound championship limit.

The 32-year-old Gordon, a native of Calgary who now calls Toronto home, came out swinging in the first round. Mokaev punched back and then took the Canadian down to the ground.

Gordon got back up but went down again, fighting off an attempted choke. Mokaev spent the rest of the round in control, on top of Gordon.

The second round was more of the same, with Mokaev on top of Gordon. The Canadian defended well from below but Mokaev continued to pile up points.

Gordon showed some offence from his back, trying for a triangle choke in the final minute of the round. And he was close to locking up a rear-naked choke when the round ended.

"He's tired," Gordon's corner told him before the third round, throwing in an F-bomb for emphasis.

Gordon rushed in to start the third, only to be taken down again immediately. He reversed position and slammed Mokaev to the ground 90 seconds in the round and took his back, looking for a submission.

Mokaev fought him off and eventually got back to his feet, dumping Gordon to the ground at the fence.

Mokaev was good on six of seven takedown attempts while Gordon was 1-for-1, according to UFC Stats.

With most of the fight contested on the ground and Gordon defending well, Mokaev finished with a slim 21-17 edge in significant strikes. He had a 119-38 advantage in total strikes.

Gordon was coming off wins over Ukraine's Denys (Psycho) Bondar and Brazil's Francisco (Sniper) Figueiredo. He lost his UFC debut by submission to Sweden's Amir (The Prince) Albazi in July 2021.