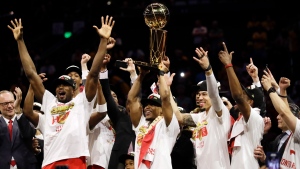 The Toronto Raptors captured their first NBA championship in franchise history on Thursday, finishing off the Golden State Warriors in Game 6 of the Finals.

Here is a look at the team's road to the title, starting after last year's playoff exit:

May 11, 2018: Coach Dwane Casey is fired after the team's third consecutive playoff elimination at the hands of LeBron James and the Cleveland Cavaliers.

July 1: News breaks that James will sign with the Los Angeles Lakers, taking him out of the Eastern Conference/

July 18: Raptors president Masai Ujiri pulls of a blockbuster deal, sending star DeMar DeRozan and Jakob Poeltl to the San Antonio Spurs for Kawhi Leonard and Danny Green. Leonard, the key to the deal, had only one year left on his contract and played just nine games last season because of injury.

Sept. 24: The day before training camp, Leonard talks to the Toronto media for the first time. His most notable quote is four words: "I'm a fun guy."

Sept. 25: Leonard has his first 5-on-5 session since January at training camp in Burnaby, B.C. "It felt great," he said.

Oct. 19: In a game between two teams considered top contenders in the East, Leonard scores 31 in a 113-101 win over the Boston Celtics.

Oct. 20: Leonard sits out the first of 21 games during the season as the team attempts to keep him as healthy as possible for a playoff run. Later in the season, the term "load management" is introduced as the reason for whenever Leonard doesn't play. A few months later, he refers to the 82-game regular season as "just practice."

Oct. 29: After a 6-0 start, the Raptors drop their first game of the season in Milwaukee in what turns out to be an Eastern Conference final preview. Leonard is not in the lineup.

Nov. 14: Casey returns to Toronto for the first time since his firing as head coach of the Detroit Pistons. He gets a standing ovation during a video tribute during the first quarter. Detroit stages a huge comeback and wins it 106-104 on a buzzer-beater.

Nov. 25: Leonard fires back at Spurs coach Gregg Popovich after the latter says the former San Antonio star "wasn't a leader." Said Leonard: "It's just funny to me because I don't know if he's talking about last year or not but I guess when you stop playing they forget how you lead."

Jan. 3: DeRozan has a triple-double (21 points, 14 rebounds, 11 assists) as the Spurs clobber the visiting Raptors 125-107 in the first meeting between the teams since the big trade.

Jan. 6: Raptors point guard Kyle Lowry returns after missing 10 of the past 11 games with injury. He has 12 points and eight assists as Toronto beats the Philadelphia 76ers 121-105.

Feb. 13: Pascal Siakam, the surprise breakout star of the year, scores a career-high 44 points in a win over the visiting Washington Wizards.

Feb. 22: Leonard has the go-ahead dunk with 15 seconds left and scores 25 points as the Raptors beat the visiting Spurs 120-117 in a thriller. DeRozan commits a turnover on the key possession. "It was (like) a playoff win for us," Leonard said after the team's seventh win in a row.

April 9: The Raptors win in Minnesota to finish the season 58-24, good for second in the East. They draw the Orlando Magic in the first round of the playoffs.

April 13: The heavily-favoured Raptors lose 113-109 against the visiting Magic in Game 1, bringing back memories of past playoff failures.

April 23: The Raptors take a big lead early and beat the Magic 115-96, finishing off Orlando in Game 5 with their fourth straight win.

May 2: For the second time in the playoffs, the Raptors face a series deficit after losing 116-95 in Philadelphia against the 76ers, who take a 2-1 lead.

May 5: Leonard hits a huge three in the final minute and scores 39 points as the Raptors beat Sixers 101-96 in Philly to tie the series.

May 12: Leonard's buzzer-beater bounces off the rim four times before finding the net, giving Toronto a 92-90 win over visiting Philly in Game 7. Leonard finishes with 41 points. "That's something I've never experienced before, Game 7, game-winning shot," Leonard said. "It was a blessing to be able to get to that point and make that shot and feel that moment. It's something I can look back on in my career." Toronto advances to the Eastern Conference final against the Bucks.

May 19: After two losses in Milwaukee, the Raptors beat the Bucks 118-112 in double overtime in Game 3. Leonard scores eight points in the second overtime period.

May 23: The Raptors take a 3-2 lead in the series with a 105-99 win in Milwaukee, stealing home-court advantage. Leonard scores 35 points, including 15 in the fourth quarter as the Raptors rallied after a horrid start. "I'm not afraid of the moment. I enjoy it," Leonard said.

May 25: The Raptors rally from a 15-point second-half deficit to beat visiting Milwaukee 100-94 and win the series 4-2, sending them to the NBA Finals against the two-time defending champion Warriors. Leonard has 27 points and 17 rebounds. Lowry, playing through the relentless pain of a sprained thumb, had 17 points and eight assists, and grabbed the game ball after the final buzzer sounded on a spectacular comeback. "Beating this (Bucks) team four times in a row is almost mind boggling," Nurse said.

June 5: Green breaks out of his slump with six three-pointers as the Raptors beat the Warriors 123-109 in Oakland. Lowry is shoved by Warriors minority owner Mark Stevens after flying out of bounds. Stevens is later banned for a year by the NBA.

June 7: The Raptors take a 3-1 series lead with another road win, prevailing 105-92. Leonard scores 17 of 36 points in a massive third quarter. "Kawhi Leonard came out and hit two big eff-you shots to start the half," said VanVleet, who lost part of a tooth and had seven stitches under his eye after taking a hard elbow in the fourth quarter. "There's no defence for that. There are no schemes for that."

June 10: Toronto falls just short of winning its first NBA title. The Raptors can't hold a late six-point lead and lose 106-105 at home after Lowry's buzzer-beater is way off. The game is marred by some Toronto fans cheering when Warriors star Kevin Durant, making his return from a calf injury, suffers a season-ending Achilles injury. After Raptors players urged fans to stop, the crowd started chanting "K-D, K-D." The Warriors weren't impressed. "That's crazy. That's crazy," Golden State's Draymond Green said. "Come on … that's classless. For me, I've always witnessed Canadians being the nicest people that I've ever encountered. That was classless."

June 12: A video emerges a day earlier showing Toronto fans swearing at Warriors star Stephen Curry's parents. "I think it's kind of stupid, to be honest, in terms of people camping outside our hotel just to yell expletives at either us or our family members or whatever the case is," he said.

June 13: The visiting Raptors win the NBA title, beating Golden State 114-110 in Game 6. Leonard is named Finals MVP. Lowry catches the game ball at the end of a terrific game for the point guard. "Toronto, Canada, we brought it home baby!" Lowry said as the Raptors received the trophy.