Coco vs. Venus, Part II, in 1st round of Australian Open 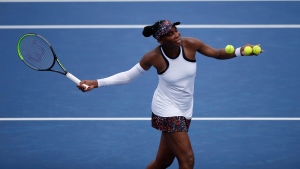 Venus Williams, of the United States, hits balls to the fans after her win against Kiki Bertens, of the Netherland, at the Western & Southern Open tennis tournament in Mason, Ohio, Tuesday, Aug. 13, 2019. (Sam Greene/The Cincinnati Enquirer via AP)

That headline-grabbing pair of tennis players -- Gauff, 15, is the youngest woman in the Australian Open; Venus is the oldest -- will meet again in the first round of a Grand Slam tournament after Thursday's draw at Melbourne Park put them in a tough quarter that also includes Serena Williams and Naomi Osaka.

Gauff had a breakout run at Wimbledon last year, when she became the youngest qualifier in tournament history, upset Venus Williams to start her main draw run and became the youngest player to reach the round of 16 there since Martina Hingis in 1996.

The winner of Coco vs. Venus -- no last names required -- could meet defending champion Osaka in the third round. The winner there potentially faces Venus' younger sister, 23-time major winner Serena, in the quarterfinals.

Serena Williams is coming off a victory in the ASB Classic in Auckland, her first title since her victory at the 2017 Australian Open and her time off the tour to have her daughter. She is seeded eighth in Melbourne and will meet Anastasia Potapova in the first round. Osaka opens against Marie Bouzkova.

Defending men's champion Novak Djokovic and Roger Federer were drawn into the same half of the field at Melbourne Park, where play begins Monday, so they could meet in the semifinals.

The second-ranked Djokovic has won a record seven Australian Open trophies and is coming off his unbeaten run at the inaugural ATP Cup, where he guided Serbia to the title. Federer hasn't added to his 20 Grand Slam titles since winning the Australian Open in 2018, his sixth title at Melbourne Park.

Top-ranked Rafael Nadal could face a fourth-round match against Nick Kyrgios -- their blockbuster at Wimbledon last year was memorable -- and a projected quarterfinal against Dominic Thiem, the man he has beaten in the last two French Open finals.

The so-called Big Three of men's tennis joined other stars, including Serena Williams, Osaka and Gauff, at the Rally for Relief on Wednesday night, an exhibition event that raised millions of dollars for relief efforts for the wildfires that have devastated parts of Australia, leaving at least 27 people and millions of animals dead. Smoke from the bush fires had the air quality in Melbourne ranked among the worst in the world earlier in the week.

On the court, Gauff looked comfortable and relaxed in the company of champions.

Osaka, speaking before the draw was revealed, said she didn't like to look at who she was playing until the day before her match. She joked in a TV broadcast that she'd leave the studio if she was forced to watch the draw.

It will certainly have her interest.

Osaka won back-to-back majors, claiming her first Grand Slam title at the 2018 U.S. Open before winning in Australia last year. Her best run since then was to the fourth round at the U.S. Open, where she thinks she got some benefit from the experience.

"I had a try at being defending champion at the U.S. Open. I'm more prepared this time," she said.

Top-ranked Ash Barty is in the same half of the field and is a potential semifinal opponent for Osaka.

Barty will open against Lesia Tsurenko. That quarter includes 10th-seeded Madison Keys, the U.S. Open runner-up in 2017, and seventh-seeded Petra Kvitova, a two-time Wimbledon champion and the runner-up in Australia last year in her first major final since a violent home invasion in late 2016 left her with career-threatening hand injuries.

Serena Williams is aiming to equal the all-time record for most women's majors, held by Australia's Margaret Court.

After her drought-breaking run to a 73rd career singles title in Auckland, Williams will again be among the favourites at Melbourne Park, where she has won the title seven times dating back to 2003.

In other standout first-round matches, five-time major champion Maria Sharapova, playing as a wild card because of an injury-interrupted 2019, will meet 19th-seeded Donna Vekic, and two-time major champion Simona Halep, the runner-up here in 2018, will take on Jennifer Brady, who upset Barty at the Brisbane International last week.

On the men's side, U.S. Open finalist Daniil Medvedev, seeded No. 4, will take on Frances Tiafoe, who made a breakthrough run to the quarterfinals in Australia last year.

The projected men's quarterfinals are Nadal vs. Thiem, Medvedev against Alexander Zverev, Djokovic against Stefanos Tsitsipas, and Federer against Matteo Berrettni. The injury-enforced absence of Alex de Minaur lifted Milos Raonic, the 2016 Wimbledon runner-up finalist, into the 32nd and last spot among the men's seeds.