Connor McDavid on NHL format: 'Not perfect, but it's the best we got' 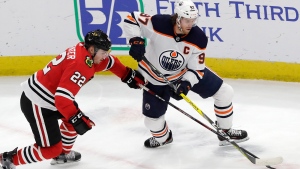 FILE - In this March 5, 2020, file photo, Edmonton Oilers center Connor McDavid, right, and Chicago Blackhawks center Ryan Carpenter vie for the puck during the first period of an NHL hockey game in Chicago. McDavid gets just his second taste of the playoffs in his fifth season. (AP Photo/Nam Y. Huh, File)

He probably should be - the captain of the Edmonton Oilers has had plenty of practice.

“Never been on a Zoom call until this whole thing happened,” McDavid said Thursday. “Definitely been on a fair bit.”

The 23-year-old superstar was part of the NHL/NHLPA committee that worked remotely via the video conferencing platform the last number of weeks to come up with the league's return-to-play blueprint should hockey be allowed to resume its season this summer.

“Definitely exciting to be part of the process,” McDavid said. “There was lots of back and forth.”

If the NHL, which paused its schedule March 12 because of the COVID-19 pandemic, gets the green light from government and health officials, 24 teams would be left to compete for the Stanley Cup.

There's been grumbling in some markets, but McDavid said no plan was ever going to please 31 clubs and more than 700 players.

“This is a format that is obviously not perfect,” he said on a Zoom call with reporters Thursday. “But it's the best we got ... so that's what we're going with.”

The top-4 teams in the Eastern and Western Conferences would play separate mini-tournaments to determine seeding, while the remaining franchises would battle in best-of-five qualifying round series to complete 16-club playoff bracket.

“I can't say that everyone agreed on everything,” McDavid said. “But that was the point of the committee, to debate stuff and take it to a larger sample size.

McDavid, whose Oilers would match up against the Chicago Blackhawks in the “play-in” round, said putting what was good for the league ahead of individual teams was paramount.

And he would know.

The Oilers sat second in the Pacfic Division and fourth in Western Conference - according to sportsclubstats.com, the team had a 95 per cent chance of making the post-season at the pause - but would have to win a best-of-five series against three-time Cup champions Jonathan Toews and Patrick Kane just to make these playoffs like no other.

Edmonton was also 11 points better than Chicago, which had just a 2.6 per cent shot of qualifying for the post-season before the novel coronavirus outbreak brought most of the sports world to a screeching halt.

“You have to do what's best for the league,” said McDavid, whose team was edged out for fourth in the West by the Dallas Stars on points percentage. “You need to take a step back and look at it unselfishly.”

Tavares said Wednesday the players were intent on making sure there's no asterisk if a team eventually lifts the Cup in an arena without fans.

“Anyone who gets their name on it wants to earn it,” he said. “I think it's going to be a very worthy and deserving Stanley Cup champion.”

McDavid said settling on the number of teams included was a “huge issue” to tackle.

“Ultimately, we beat this thing to death,” he said. “This just seems to check off most of the boxes for most teams. We just have to live with that and play the games and see what happens.”

The NHL has said it will require up to 30,000 COVID-19 tests for players if the season resumes, adding that a positive result wouldn't necessarily derail the 24-team format.

Oilers defenceman Darnell Nurse was on Thursday's call with McDavid, and was asked about how comfortable he'd be with continuing if a teammate or opponent tested positive.

“Every single person is at a different comfort level,” said the 25-year-old. “It's easy for a lot of people to sit back and say, 'You guys are in a low-risk demographic.'

“This is an area that we've never had to deal with ... no matter what the format, the testing's going to be huge.”

Edmonton, Vancouver and Toronto are among 10 cities shortlisted by the NHL as potential hubs for the 24 teams that would likely have to stay in a bubble away from the pubic, and potentially away from family, for months on end.

McDavid, who finished second to fellow Oilers centre Leon Draisaitl in the overall scoring race, shot down the argument a team would have an advantage playing in its home rink.

“It's gonna feel weird in that building no matter where you play, no matter if you've played there 100 times,” he said. “The building is going to feel weird just with no fans being in there.”

The return-to-play plan was an important step for the NHL, but also just that - a step - in its aim to salvage the 2019-20 campaign. The league hopes to open team facilities and allow players to skate in small groups starting next month, hold training camps in July and get back to game action three or four weeks after that.

But McDavid, who got an up-close look at just one part of the process, knows there's lots of work still to do.

“It's exciting,” he said. “We're working toward getting back to playing hockey, which is what we all want to do.”

Only time will tell if that actually happens again this season.

This report by The Canadian Press was first published may 28, 2020.