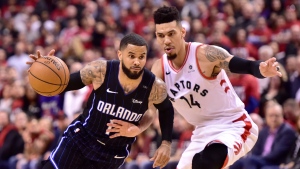 TORONTO -- In a game not short on mistakes, the last one proved to be a killer for the Raptors.

With the score tied at 101, the clock ticking down into the single digits and the sellout crowd of 19,937 at Scotiabank Arena chanting "Defence, Defence," Orlando guard D.J. Augustin moved the ball forward. Kawhi Leonard, a two-time defensive player of the year, was in front of him -- his plate-sized hands out to each side.

As Leonard backed toward the three-point line, Orlando big man Nikola Vucevic moved up to set a screen. Defender Marc Gasol, another past defensive player of the year, followed Vucevic.

As the three came together, like a sandwich with the Orlando seven-footer in the middle, Vucevic peeled off to give Augustin a path. Then both Leonard and Gasol stepped back, leaving Augustin clear space just outside the three-point line.

Clearly both Raptors weren't supposed to leave the Orlando shooter.

Augustin, who had tied the game with a sweet finger-roll layup with 44.9 seconds remaining, rose and sank a three-pointer from 28 feet out with 4.2 seconds left.

"There was a mistake made on that play," Gasol said. "We miscommunicated and he made a good shot. That's what happened."

It was the same pithy story from Leonard.

"We just switched and he knocked down a big shot. Pretty much, that's what happened."

The 31-year-old Augustin told his side of the story with a little more relish.

"They were switching the whole game," he said of the Raptors. "I came up to pick with Vuc and I saw Kawhi kind of go under the screen and I saw Marc try to step up. So he gave me a little space and I took what the defence gave me.

"When I saw the opening, I shot the ball with confidence and it went it," he added.

It proved to be the winner as seventh-seeded Orlando upset No. 2 Toronto 104-101 in Game 1 of their first-round playoff series.

Augustin, whose career average is 9.8 points a game, finished with a post-season career-high 25 points to lead the Magic. He made four of five three-point attempts and finished with six assists.

The six-foot guard counts the Raptors among the clubs on his resume. He also had stints with Charlotte, Indiana, Chicago, Detroit, Oklahoma City and Denver.

Augustin says he has never listened to the doubters.

"I've been the same size since I was little. Nobody expected me to be in the NBA. I'm going into my 12th year. I never listened to what the outside people said, I only care about my family, the people close to me and my teammates. And they believe in me. My coaches believed in me from the jump. That's all I needed, man."