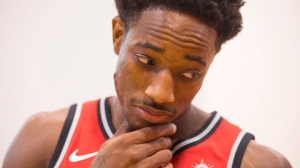 Toronto Raptors' DeMar DeRozan speaks to a journalist during a media day in Toronto on Monday, September 25 , 2017. THE CANADIAN PRESS/Chris Young

TORONTO - In the time it took the Toronto Raptors to finishing hoisting the Larry O'Brien Trophy on the floor of Oracle Arena, DeMar DeRozan had sent each one a congratulatory text.

The former Raptor, who was famously traded in the previous off-season to San Antonio for Kawhi Leonard, said there were no hard feelings following Toronto's championship run.

“I think I talked to everybody that night they won, I was just happy for them man, it's an opportunity that players playing in this league don't get, and to be connected to those guys and to this country, to see them do that, I was definitely happy for them,” DeRozan said.

Did the 30-year-old who played nine seasons in Toronto feel any sense of pride? Any part of the historic feat?

DeRozan addressed a couple dozen reporters on Sunday before he took the Scotiabank Arena floor to face his old team. He arrived on the heels of one of the best stretches of his career, scoring 20-plus points in 10 consecutive games - the first Spurs player in history to do so.

“Just figuring it out,” DeRozan said as an explanation. “I always try to analyze myself as much as I can when things are going good and especially when things are going bad. And I'm just a fan of basketball. I always watch games where I can steal a move, wonder why a certain guy can get to the free-throw line a certain amount of times or get a certain shot off, or whatever it may be. It's small things like that that I try to figure out.”

DeRozan said young players have started approaching him for advice. He joked that it bothers him a bit.

“I'm like, 'Damn, am I that old?”' he laughed. “But it's been a few young guys that, in the middle of the game or watching film, they ask me if they can work out with me in the summer . . . But it's cool to be recognized like that here, because I remember when I was on the other side and I appreciated any word any veteran gave to me.”

DeRozan and Kyle Lowry became close friends in their time as Toronto teammates. Lowry said the two would go for dinner when the Spurs arrived in town Saturday night.

Asked for his thoughts on Lowry's play this season, DeRozan said: “He's been terrible.

“Naw, Kyle's been great,” he said.“ It seems like the older he gets the better he still gets. And that's amazing to see... He plays every single night, the way he orchestrates the floor, and the way he can take over a game offensively. And knowing he's getting older and older and still doing it at a high level is definitely incredible.”

It was DeRozan's second game in Toronto since the blockbuster trade that also sent Jakob Poeltl to the Spurs. The Raptors beat San Antonio 120-117 last February in Toronto when Leonard stole the ball from DeRozan and scored on a go-ahead dunk. Leonard sealed the victory on a pair of free throws in the final second as the crowd chanted “M-V-P!”

DeRozan and Lowry have often said their friendship is bigger than basketball, and they've remained close since DeRozan's departure.

When asked why DeRozan was so beloved by Toronto fans, Lowry said: “He gave everything.

“He was the guy who said 'I got us' when (Chris Bosh) left, he re-signed here and helped take the organization to new heights - from not winning to winning and winning big. He poured his heart into the city . . . He gave the city and lot and the city (saw) him grow from a boy to being a man.”