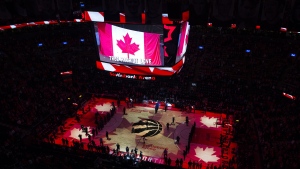 SHANGHAI -- The Toronto Raptors are adding Brittni Donaldson to their bench in a coaching shuffle.

The Raptors data analyst becomes the 10th female assistant coach in the NBA.

Nick Nurse confirmed the promotion on Sunday in Shanghai, where he's coaching Canada's men's team at the FIBA World Cup.

The Raptors' coaching shuffle will see Eric Khoury move to the Raptors 905 where he'll serve in a more significant assistant role. Nurse also hired Fab Flournoy and Mark Tyndale as assistants this off-season.

The NBA is one of the most progressive pro leagues in terms of promoting women, and recent weeks have seen the hiring of several women as assistant coaches.

The Raptors open the regular season on Oct. 22 versus New Orleans.