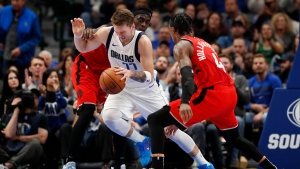 Dallas Mavericks guard Luka Doncic (77) is fouled by Toronto Raptors' Pascal Siakam as Rondae Hollis-Jefferson (4) looks on in the second half of an NBA basketball game in Dallas, Saturday, Nov. 16, 2019. (AP Photo/Tony Gutierrez)

DALLAS -- Luka Doncic was upset when he missed four of 12 free throws in the first three quarters of Saturday night's game against Toronto.

Then, he went 7 for 7 from the line in the fourth quarter as Dallas built on its one-point lead and the Mavericks went on to beat the Raptors 110-102.

Doncic finished with 26 points and 15 rebounds, including a career-best 15 free throws in a career-high 19 attempts.

"(Doncic) can do it all," said guard Fred VanVleet, who scored 24 points for Toronto. "He's a threat at every level, mid-range and 3, and kicking out to his teammates. Thought we did a good job on him tonight, just couldn't keep him off the free throw line.

"I thought that he got all his points from the foul line. I thought he was treated very well tonight," Nurse said

Delon Wright finished with 15 points and banked in a fadeaway jumper with 5 seconds left in the third quarter to send Dallas into the fourth quarter with a 78-77 edge. Wright added six points against his former team in the fourth quarter.

Kristaps Porzingis had 20 points and matched his career best with 15 rebounds for Dallas.

"I felt much more comfortable today," he said. "It felt more natural today, not as forced. I just missed a lot of good looks, a lot of open shots, but I'm happy we got the win. If I scored a few more of those open looks, it could have been a much easier game for us."

Doncic noted Kleber's contribution on defence in a win over the defending NBA champions.

Siakam, Toronto's leading scorer, had 15 points on 10-for-24 shooting. Norman Powell led the Raptors with a season-high 26 points, including 13 in the fourth quarter. Matt Thomas scored 10.

The Mavericks used a 15-0 run in the first quarter to transform a 10-3 deficit into an 18-10 lead. Kleber scored the first five points, and Finney-Smith ended the run with a layup 3 1/2 minutes later.