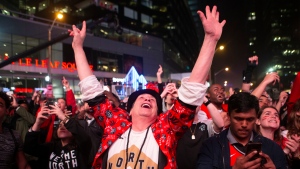 Toronto Raptors fans celebrate in the closing seconds of the team's 100-94 win over the Milwaukee Bucks to take the NBA Eastern Conference Championship, in Toronto on Saturday, May 25, 2019. The Raptors go to the NBA final for the first time in the franchise's history. THE CANADIAN PRESS/Chris Young

Cars honked, exhilarated fans chanted and long lines formed outside bars and restaurants on the streets of Toronto well into the night Saturday after the Toronto Raptors defeated the Milwaukee Bucks to clinch the NBA Eastern Conference final 4-2.

The Raptors will play in the NBA Finals for the first time after beating the Bucks 100-94 in a historic game that saw thousands of fans spill out of Jurassic Park, the outdoor fan zone, and into the streets that surround Scotiabank Arena.

A sea of fans chanted "We the North" and "Let's go Raptors" while police cars, TTC buses and streetcars honked in celebration.

"I'm so pumped. I'm so happy, but so tired from cheering," said 22-year-old Jesse Fairbloom outside the arena. "Getting home is going to be nuts."

Leading up to Game 6, fans were lined up to pack Jurassic Park just as a thunderstorm rolled through the city. It prompted Toronto police to post on Twitter just after 6 p.m. that they wouldn't open the fan zone on schedule because of safety concerns -- a ban that was lifted an hour later and didn't dampen supporters' resolve.

Standing outside Union Station, Duska Males, 27, and Katie Scott, 30, said they were "ecstatic" to hear the festivities would go ahead after waiting in line for two hours. The two friends drove more than an hour from Waterloo, Ont., to see the game.

The din of the roaring crowds could be heard a kilometre away from the arena, and elsewhere in the city, groups of people huddled around smartphones and peered through sports bar windows to get a glimpse of the game.

As the game approached, some placed bets on the prospective antics of Drake, the Toronto rapper who's become a vocal and sometimes polarizing ambassador for his home team. Possible options included whether Drake would touch Raptors head coach Nick Nurse like he did in Game 4, and whether Bucks star Giannis Antetokounmpo would speak to Drake.

Drake wore a black hoodie that read on the back: "Kawhi Me A River" and unlike Game 4, when he drew criticism from Milwaukee coach Mike Budenholzer and Bucks fans for his courtside antics, Drake was on his best behaviour Saturday night as he bounced up and down during the game.

The city will have only a handful of days to recover before the Raptors host the Golden State Warriors in Game 1 of the NBA Finals on Thursday.

Earlier in the day social media was abuzz with talk of organizing viewing parties, blowing off long-held plans to tune in the game, and finding ways to modify previously scheduled events to include their favourite team.

The 26-year-old software developer said he and his Ontario-born girlfriend would be the only Raptors fans at the party, held in honour of an avid Bucks booster.

Lunn said he intended to make sure the game was aired at the Seattle-based winery where the party was held, adding the drinks that were expected to flow would make the perfect celebratory touch.

"We're going to roll it into a Raptors win," he said.

"My daughter's wedding is Saturday, do you think she would mind if I missed it?" quipped one Twitter user.

Toronto Raptors fans celebrate in the closing seconds of the team's 100-94 win over the Milwaukee Bucks to take the NBA Eastern Conference Championship, in Toronto on Saturday, May 25, 2019. The Raptors go to the NBA final for the first time in the franchise's history. THE CANADIAN PRESS/Chris Young