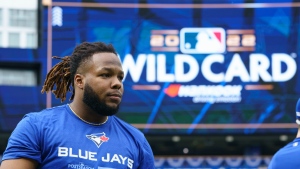 Toronto Blue Jays infielder Vladimir Guerrero Jr. (27) is photographed before practice, ahead of the team's wildcard series matchup against the Seattle Mariners in Toronto, Thursday, Oct. 6, 2022. THE CANADIAN PRESS/Alex Lupul

The Toronto Blue Jays fell to the Seattle Mariners 4-0 last night in the first game of their American League wild-card series.

Here are five things to know heading into Game 2 of the best-of-three series:

ON DECK — Kevin Gausman, who earned a 12-10 regular-season record with a 3.35 earned-run average, will start for Toronto this afternoon. Seattle will counter with Robbie Ray, who had a 12-12 record with a 3.71 ERA this year.

"I've never pitched an elimination game before, but I started the last game of the season in 2016 (for the Baltimore Orioles)," said Gausman. "We needed to win that game.

"So I've pitched in a lot of meaningful games in my career. Obviously not an elimination game but I've just got to go out there and pitch to my strengths."

RAY RETURNS — Ray won the Cy Young Award as the AL's best pitcher while playing for the Blue Jays in 2021. He didn't pitch when the Mariners visited Toronto earlier this season, instead being placed on Seattle's restricted list for players not fully vaccinated against COVID-19. He said yesterday he was excited to return to Toronto.

"I think you just have to control your emotions. Not let the situation get too big. Not let the crowd control how you're feeling about the game," said Ray.

"It's, obviously, going to be very loud here. The roof is closed. They're going to be packed out. The fans here are loud. They love baseball. They love the Blue Jays. So, it's going to be loud."

BLUE JAYS INJURIES — Second baseman Santiago Espinal was on Toronto's 23-man post-season roster on Friday but left out of the Game 1 lineup as he continued to recover from a left oblique strain. Outfielder Lourdes Gurriel Jr. (hamstring) was left off the roster entirely, however. Interim Blue Jays manager John Schneider's hope is that Toronto can advance to the American League Division Series against the Houston Astros without Gurriel. Schneider hinted that Espinal could make the lineup against the left-handed Ray in Game 2.

"You try to break down every possible scenario that may occur the next three days, whether they're good or bad, and try to make your best decision," said Schneider.

SPRINGER FINE — Blue Jays outfielder George Springer has battled with a sore right elbow for most of the season. It looked like his left elbow was also going to be hurting after he was hit by a pitch in the eighth inning of yesterday's loss. Springer was able to get his elbow out of the way of a 97.9 m.p.h. four-seam fastball from Mariners starter Luis Castillo. The pitch, however, did hit his wrist. Schneider said after the game that Springer was OK.

"X-rays are negative for a fracture," said Schneider. "He's feeling all right, and we'll see how he feels (Saturday), but hoping he's good to go."

POP UP — Relief pitcher Zach Pop of Brampton, Ont., made his post-season debut in the eighth inning. The 26-year-old Pop gave up a single to Eugenio Suarez before striking out Cal Raleigh. He allowed a double to Mitch Haniger before being replaced on the mound by Trevor Richards.

This report by The Canadian Press was first published Oct. 8, 2022.

Toronto Blue Jays infielder Vladimir Guerrero Jr. (27) is photographed before practice, ahead of the team's wildcard series matchup against the Seattle Mariners in Toronto, Thursday, Oct. 6, 2022. THE CANADIAN PRESS/Alex Lupul