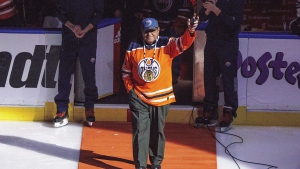 Former Chicago Blackhawks player, and the first indigenous pro hockey player, Fred Sasakamoose is honoured at the Edmonton Oilers and Chicago Blackhawks game in Edmonton on December 29, 2017. Fred Sasakamoose, one of the first Indigenous players in the NHL, has died after battling a presumed case of COVID-19. He was 86. THE CANADIAN PRESS/Jason Franson

Fred Sasakamoose, one of the first Indigenous players in the NHL, has died after battling a presumed case of COVID-19.

Sasakamoose died Tuesday in Prince Albert, Sask. He was 86.

Fred's son, Neil, announced his death in a video posted on Facebook.

Neil Sasakamoose said last week that his father had been hospitalized in Saskatchewan for a presumed case of COVID-19 after experiencing wheezing and chest pains.

“We weren't allowed to go sit with one of the most famous Indigenous people in our time,” he told The Canadian Press in a phone interview Tuesday.

“We weren't able to comfort him. My mother was not able to see her husband. They've been married 65 years.”

Sasakamoose said he learned early on Tuesday his dad's oxygen levels were depleting, but didn't want to go into intensive care.

He said the last conversation he had with his father was at around 1 p.m.

Sasakamoose said in their Plains Cree culture they believe people come to get a person when it's their time to die.

“I told him, `Look it, Dad, if someone's there and if you're tired, you just take their hand and you go.'

He wants people to remember his father as a man who was “rooted right into the people.”

“We were happy to have him as a father, but he's always belonged to everyone else.”

Sasakamoose says his family has164 people, including his nine siblings and parents' grand-children and great-grandchildren.

He implored people to follow public-health advice around COVID-19 to prevent more deaths from happening.

“Look at my situation. I can't plan a funeral for one of the greatest Indigenous athletes in Canada.”

Sasakamoose played 11 NHL games with the Blackhawks in 1953-54, becoming one of the first Indigenous players in the then-six-team league.

During his time in Chicago, he faced off against greats like Maurice Richard and Gordie Howe.

He also had a storied junior career, playing several seasons with the Moose Jaw Canucks of the Western Canadian Junior Hockey League.

“We are deeply saddened to learn of the passing of Fred Sasakamoose,” Hockey Canada said in a tweet. “Fred holds a special place in the history of our great game and it is important to honour his perseverance and character in becoming the first Indigenous Canadian to play in the NHL.”

Sasakamoose was one of 11 children, though only five survived childhood. He was forcibly taken from his community in central Saskatchewan to a residential school as a child and told a Truth and Reconciliation Commission hearing in 2012 that he had been sexually abused by other students there.

He also recalled being whipped and having coal oil poured over his head.

While at the school he encountered a reverend, who was convinced he could make Sasakamoose into a big-time hockey player.

“He said to me, 'Freddie, I'm going to make you a champion,”' Sasakamoose recalled in a video released by Hockey Canada in 2017.

Being someone young Indigenous people could look up to was important to Sasakamoose.

“To pave the way for Indian kids and the Metis, they look at you as a role model and they say 'Wow.' They look at my rings and my pictures. This is what I gain in life. This is what brought me to where I am,” he said in the video.

“It's for you now to follow in the footsteps - maybe be better.”

“RIP to my buddy, Freddy Sasakamoose,” Canadian women's hockey player Brigette Lacquette, who is Indigenous, posted on Twitter. “He was a trailblazer, a leader and a survivor.

“He paved the way for so many Indigenous hockey players. My thoughts and prayers to the family. Rest easy, legend.”

When his playing career came to an end, Sasakamoose returned to the Ahtahkakoop Cree Nation north of Saskatoon. He became a band councillor and chief, and worked to develop minor hockey and other sports programs across Saskatchewan.

“On a personal note, I will always treasure meeting Fred at the 2019 Heritage Classic in his native Saskatchewan, getting to spend some precious time getting to know him and the gift he gave me that day -- a statue depicting his NHL rookie card,” NHL commissioner Gary Bettman said in a statement.

“The National Hockey League mourns the passing of this special man and sends its condolences to his family and the countless young men and women of the First Nations community whose lives he touched.”

Sasakamoose was named to the Order of Canada in 2017, and given an honorary doctorate of law by the University of Saskatchewan earlier this year.

Due to the COVID-19 pandemic, the convocation ceremony was virtual so Sasakamoose recorded a video message.

“I had a hard time of life,” he said. “You want to be somebody, then it takes, you know, a little more effort.”

Still, the Indigenous hockey pioneer wanted his story to be heard. His book, “Call Me Indian,” is set to come out in April.

“Time will come when I am no longer here,” Sasakamoose said in his convocation message. “But my voice you will always use.”