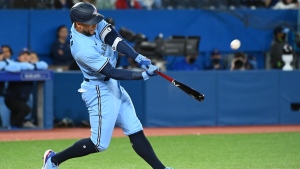 George Springer had two solo home runs and the Toronto Blue Jays held off the Houston Astros 2-1 on Saturday.

José Berríos (2-0) struck out five over 5 2/3 innings, allowing one run on seven hits and two walks.

Romano, from Markham, Ont., earned his 10th save of the season.

Luis Garcia (1-1) allowed two runs on five hits and a walk, striking out five. Seth Martinez and Ryne Stanek came out of the bullpen for Houston.

Springer hit his fifth homer of the season in the Blue Jays' first at bat of the game. The Toronto DH battled through the lengthy at bat, eventually sending Garcia's seventh pitch just over the left-field wall.

Alvarez cut into that lead in the fourth. Hitting leadoff in the inning, he put a 2-1 pitch from Berríos to dead centre for his sixth of the season.

Springer struck again in the third inning, launching a 2-0 pitch to left-centre field with one out to give Toronto a 2-0 lead.

Home plate empire Nic Lentz called Vladimir Guerrero Jr. out on a close strike call for the final out of the fifth inning, with the big Toronto first baseman tossing his bat in anger. Blue Jays manager Charlie Montoyo immediately stormed out of the dugout to argue the call and was tossed from the game for his efforts. He stayed out on the field for a few more minutes to give Lentz a full lecture before returning to Toronto's clubhouse.

Romano got leadoff hitter Chas McCormick to ground out to shortstop Bo Bichette to start the ninth inning. The Toronto closer then struck out Niko Goodrum and, with the Rogers Centre crowd of 40,732 on its feet, induced an Alex Bregman flyout.

LIVE BP — Blue Jays lefty Hyun-Jin Ryu (forearm) pitched three innings of live batting practice on Saturday morning, facing Teoscar Hernández (oblique) among others while being caught by Danny Jansen (oblique). Montoyo said that all three looked good in the session. He added that Ryu and Hernández may need rehab appearances with triple-A Buffalo before returning to the Blue Jays' lineup.

SAUCED — Left-handed pitcher Tayler Saucedo was placed on the 10-day injured list by the Blue Jays ahead of Saturday's game. He will undergo an MRI after he was pulled from Friday's 11-7 loss to Houston with right hip discomfort. Righty Bowden Francis was recalled from Buffalo to replace Saucedo, a day after he had been sent down to the triple-A club. Montoyo joked that Francis had to turn around at Niagara Falls but the pitcher confirmed he had arrived in Buffalo before having to return to Toronto.

LOOKING AHEAD — Kevin Gausman (1-1) gets the start for the Blue Jays in Sunday's matinee against Houston. Framber Valdez (1-1) will take the mound for the Astros.

This report by The Canadian Press was first published April 30, 2022.