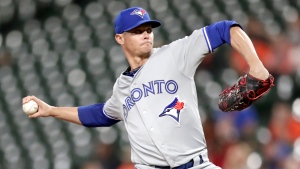 BALTIMORE - Randal Grichuk hit a grand slam with two outs in the ninth inning, and the Toronto Blue Jays rebounded from an ineffective start by Clay Buchholz to rally past the Baltimore Orioles 11-10 on Wednesday night.

Grichuk's 30th home run highlighted a six-run ninth that began with Toronto trailing 9-5. The shot came off Miguel Castro (1-3), who was charged with all six runs.

Blue Jays star Vladimir Guerrero Jr. left in the ninth after being shaken up making a hard slide into second base.

Brock Stewart (4-0) worked the eighth and Derek Law finished for his fifth save, retiring Trey Mancini on a bases-loaded grounder to end a game that lasted 4 hours, 8 minutes.

Homers by Jonathan Villar and Anthony Santander in the fourth inning put Baltimore ahead 7-1 and ended another disappointing outing by Buchholz. He allowed 10 hits, seven for extra bases, in 3 2/3 innings and left with a 6.48 ERA.

The oldest man on a team rebuilding with youth, Buchholz has spent more days on the injured list than on the active roster. The 35-year-old started on the IL with an elbow strain and was sidelined with right shoulder inflammation from May 9-Aug. 24.

This was the shortest of his 10 starts this season. Buchholz missed time last year with Arizona because of elbow and oblique injuries, and in 2017 he had season-ending elbow surgery after making two starts in April.

Now, 12 years after throwing a no-hitter against the Orioles for Boston in his second major league start, Buchholz faces an uncertain future after he completes the final days of a one-year deal he signed in March.

In an eventful first inning, Dylan Bundy struck out Teoscar Hernandez with the bases loaded to end the top half and Derek Fisher opened the bottom half by reaching over the left-field wall to rob Villar of a home run. With two outs, Santander, Rio Ruiz and Austin Hays doubled in succession for a 2-0 lead.

It was 4-1 in the fourth before Villar hit his 23rd homer, Trey Mancini singled and Santander sent a 1-2 pitch deep into the right-field seats.

Buchholz never turned to follow the path of the ball. He simply motioned for another baseball, caught it barehanded and trudged back to the mound.

An instant after that, manager Charlie Montoyo went to the mound and took that ball from Buchholz.

Not long after hitting for the cycle in Tuesday's 8-5 victory, Toronto 2B Cavan Biggio received a message from someone who knows what it's like to accomplish the feat in the majors: His father Craig, who did so April 8, 2002.

“He shot me a text after the game and said 'Congratulations, welcome to the club,”' Cavan Biggio said.

The Biggios are the second father-son duo to hit for the cycle in the majors, joining Gary and Daryle Ward.

Blue Jays: LHP Tim Mayza underwent surgery to reconstruct the ulnar collateral ligament and repair the flexor tendon in his left elbow. Mayza, who was 1-3 with a 4.91 ERA in 68 relief appearances, will miss all of next season and hopes to return for spring training in 2021.

Orioles: Renato Nunez is day-to-day after being hit on the left hand with a pitch Monday in Detroit. He's one HR shy of 30. ... A collision with the outfield wall Tuesday night while chasing Biggio's triple did not give Mason Williams a concussion but left him with a sore shoulder and knee.

Orioles: RHP Gabriel Ynoa (1-8, 5.74) makes his 12th start and 35th appearance. His only win of the year came in a relief role on July 17 against Washington.