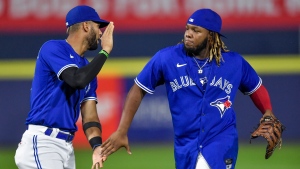 Guerrero, named the All-Star MVP on Tuesday night, connected off Texas starter Jordan Lyles in the first inning to make it 1-0 and added a three-run blast in the sixth against Dennis Santana, his 30th of the season. That led to chants of “M-V-P!” from the crowd of 10,100 as the Blue Jays opened their final stretch of games in their temporary Buffalo home. The team received approval from the Canadian government on Friday to return to Toronto for the homestand that begins July 30.

Ray (8-4), who took a no-hitter into the seventh inning on Sunday at Tampa Bay, allowed four hits and two walks while striking out eight. Semien, Hernandez, and Grichuk all homered in the third for the Blue Jays, who won consecutive games for the first time since July 2-3.

Eli White had a two-run homer in the ninth for the Rangers, who dropped their third straight and have lost six of eight. Lyles (5-6) went four innings and allowed four home runs for the second time in his career, with both instances coming in his last six appearances.

Before the game, Toronto manager Charlie Montoyo said he was eager to return to Rogers Centre for the first time since 2019.

“Even though Buffalo's been great to us, and we appreciate everything the city and the fans have done in making us feel at home, of course we're hoping to go to Toronto and play in front of our fans,” he said.

Buffalo-born Rangers C Jonah Heim made his first appearance at Sahlen Field and had a sharp single to lead off the seventh inning.

Fans gave him a standing ovation after the hit and Heim, who played at suburban Orchard Park High School, waved to acknowledge the crowd. Heim, taken by Baltimore in the fourth round of the 2013 draft, had never played in the park, even in the minors.

According to the Elias Sports Bureau, he is the first Buffalo-born player to participate in a major league game in the city since John Gillespie, who played on Oct. 1, 1890 for the Buffalo Bisons against the Boston Reds.

Rangers: LHP John King (shoulder inflammation) is scheduled to “pick up a ball” this weekend, according to manager Chris Woodward, and was likely to miss his first post-All Star Break turn in the rotation.

Blue Jays: LHP Ryan Borucki (forearm flexor strain) was activated from the injured list before the game and worked the eighth inning, allowing a leadoff single and striking out two. To make room on the 40-man roster, the Blue Jays designated RHP Joel Payamps, who had been with Triple-A Buffalo, for assignment.