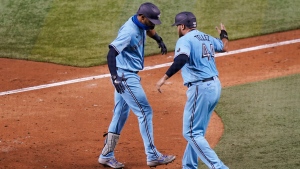 After Miami's Sixto Sanchez got through the first four innings on 43 pitches, Gurriel snapped the rookie right-hander's 11-inning scoreless string with a two-run shot for a 2-0 lead in the fifth. Gurriel drove Sanchez's 0-1 slider over the left-centre wall for his fifth homer.

A.J. Cole and Rafael Dolis each pitched scoreless innings and Anthony Bass got his fourth save for the Blue Jays, who are 12-12 in one-run games.

Jonathan Villar had two hits in his second game since joining the Blue Jays in a trade with Miami on Monday.

Sanchez (1-1) was lifted after seven innings. He allowed six hits and struck out five.

Miami scored its run on Garrett Cooper's RBI single in the fifth.

The Blue Jays committed three baserunning blunders that ended innings. Jonathan Villar was thrown out attempting to stretch a single into a double in the first, and Miami catcher Jorge Alfaro picked off Gurriel at first in the second and Villar at third in the fourth.

Marlins: RHP Eliecer Hernandez (lat muscle sprain) was placed on the 10-day injured list. Hernandez felt discomfort and departed after pitching two plus innings in his start Tuesday against the Blue Jays. In a corresponding move, Miami promoted IF Eddy Alvarez from its alternate training site.

Blue Jays: RHP Taijuan Walker (3-2, 3.27 ERA) will make his second start for Toronto on Thursday at Boston. Acquired from Seattle Aug. 27, Walker pitched six shutout innings against Baltimore in his debut with the Blue Jays on Aug. 29.

Marlins: RHP Pablo Lopez (3-2, 2.10 ERA) will start the opener of a three-game series at Tampa Bay on Friday night. Lopez has not allowed more than two earned runs in any of his six starts this season.