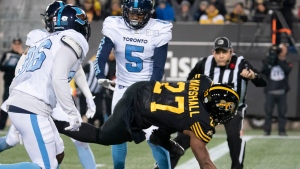 Hamilton Tiger Cats running back Cameron Marshall (27) gets across the goal line for a touchdown during first-half CFL football game action against the Toronto Argonauts, in Hamilton, Ont., Saturday, Nov. 2, 2019. THE CANADIAN PRESS/Peter Power

Hamilton also swept the three-game series with Toronto. And Ticats head coach Orlondo Steinauer tied Dave Dickenson's CFL record for most wins by a first-head coach of 15 set in 2014 with Calgary.

But the dramatic kick capped a game that felt - and often looked - like a pre-season contest as both teams didn't dress most of their starters. Hamilton (15-3) had already clinched first in the East Division, and home field for the conference final Nov. 17, while Toronto (4-14) was eliminated from post-season contention a while ago.

Punter Ronnie Pfeffer, not kicker Zach Medeiros, had a chance to put Toronto ahead but missed a 22-yard field goal that went for a single to tie the score 18-18 at 12:38. Hajrullahu's 57-yard single at 8:57 of the fourth put Hamilton ahead 18-17.

Watford was 5-of-8 passing for 74 yards. Hamilton's Cam Marshall ran for 109 yards and two TDs.

Third-year pro Dakota Prukop started for Toronto, completing 4-of-9 passes for 118 yards and a TD in the first half before giving way to Canadian rookie Michael O'Connor to start the third. O'Conner was 10-of-16 passing for 112 yards.

Hamilton got possession at the Toronto 45-yard line with three seconds left but settled for Moore's 17-yard completion to Jones rather than try the field goal.

It was a roller-coaster half for Moore, who finished 12-of-19 passing for 131 yards with two interceptions. He had another erased by a Toronto penalty.

It came after Hajrullahu's 28-yard field goal put Hamilton ahead 10-6 at 3:45. That was set up by Justin Tuggle's recovery of Qudarius Ford's fumble on Hajrullahu's 21-yard onside punt at the Toronto 20-yard line.

It was an inauspicious debut by Moore, whose first CFL pass was intercepted by Richardson and returned for the TD just 3:36 into the first. Medeiros missed the convert.

But Richard's illegal contact penalty nullified an Alden Darby interception in Toronto's endzone. That put Hamilton on the Argos' five-yard line and Marshall ran in from there at 13:11 to give the Ticats a 7-6 advantage.

This report by The Canadian Press was first published Nov. 2, 2019.